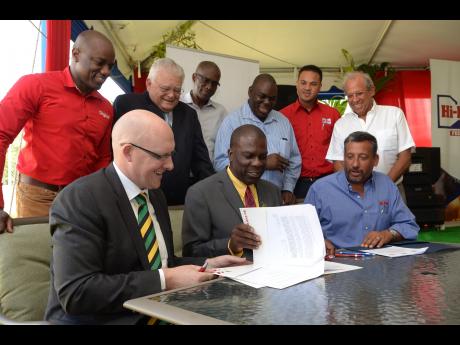 THE 64TH staging of the Denbigh Industrial and Food Show, scheduled to run from July 31 to August 1, will showcase two new features that are expected to add to the overall quality of the event.

Norman Grant, chairman of the show, said the Denbigh Promotional Village and the Champion Organic & Poultry farmer competition will be introduced to enhance the show which is being staged under the theme ‘Grow What We Eat, Eat What We Grow Through Climate Smart Agriculture’.

Addressing Wednesday’s launch on the grounds of the Ace Super Centre at White Marl, St Catherine, Grant said the promotional centre will ensure that the show remains the premier agricultural show in the Caribbean.

“It must remain the preferred choice for our people to attend in large numbers, and, by extension, this product will remain relevant and current,” he said.

“As such, annual reviews are done and recommendations and adjustments are adopted and implemented.”

Added Grant: “For the last two years, our patrons have expressed the need for a central product-promotional centre, where exhibitors are allowed to select and place specific items for promotion in this area. This suggestion was added, giving birth to the Denbigh Promotional Centre.”

He revealed that the centre will be manned by a coordinator and a team. The layout, he added, will adopt a gallery format, with displays based on invitation only and must be accompanied by literature and personnel for daily presentatiosn about the products.

According to Grant, the Organic and Poultry Farmer Competition will be spearheaded in collaboration with the Jamaica Diaspora Agriculture Task Force and the Jamaica Organic Agriculture Movement. It will be sponsored by the diaspora.

Industry, Commerce and Agriculture Minister Karl Samuda, who officially launched the show, said he has come to the ministry with a goal to move agriculture forward.

“The objective is to do what I can to make sure that the way we do agriculture, in relationship to business enterprise, will be changes significantly attitudinally and in terms of outcome.”

According to Samuda: “In setting out the goals for growth and prosperity, we recognised that we cannot really grow and be masters of our own destiny unless we can at least expand those things we can produce locally for local consumption.”

He said the excess must be exported so that the country can achieve growth. Samuda also called for the establishment of a chart of all the things that can be produced locally that are now being imported since the Government cannot function on a hit-and-miss basis.

The minister said the theme ‘Grow What We Eat, Eat What We Grow Through Climate Smart Agriculture’ sounds nice, but empirical evidence and a strategy driven by facts is needed to move forward in eliminating imports.

One of the highlights of the launch was the signing of a memorandum of understanding between Digicel, Hi-Pro and the Denbigh committee.

The Jamaica Broilers Group, through its Hi-Pro brand, has renewed its commitment to provide sponsorship of the annual Denbigh Agricultural & Industrial Show in the amount of more than $60 million for the next three years.