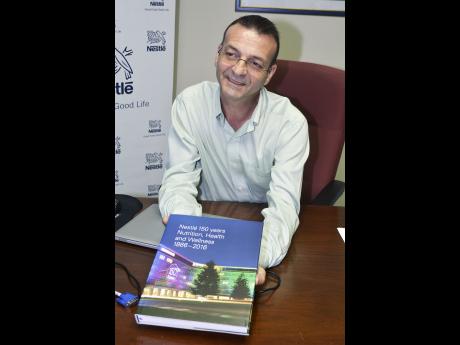 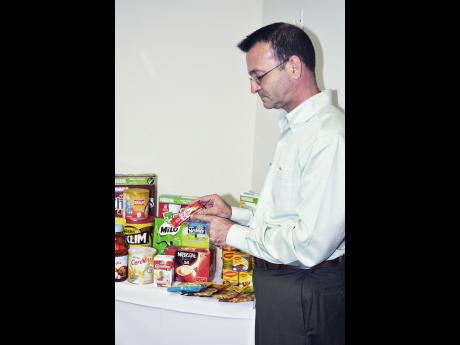 Tehri-Ann Brown
Daniel Caron with a display of some of his company’s products.
1
2

Daniel Caron is the new country manager for Nestle Jamaica. The Canadian native started in his new role in June, replacing Jurg Blaser who headed the Jamaican subsidiary of Nestle for a little over two years.

Caron commenced his career with Nestle Canada in 1995, providing expertise in developing food solutions for many of Nestle's businesses, including the culinary, beverage, confectionery, waters, health care, coffee and ice-cream sections.

Prior to joining Nestle, Caron grew up in the hospitality industry, with both of his parents professionally trained in different areas. His mother was a chef and his father a dietician. Caron also spent much of his young days in the kitchen, on the farm and in hotel businesses.

"For me, it was what I knew. I grew up in an environment of serving others. I started working within the family, operating a canteen in a sports complex when I was 11 years old. It's really just my culture being around a lot of people," Caron said.

As the general manager of several hotels, including the Sheraton in his early 20s, Caron joined Nestle from the hospitality industry. "Nestle came to me about three times and wanted me to design meal solutions for hotels, cruise ships and airlines. The third time, I accepted. I loved the challenge and everything came together once I started working there," he said.

In a career spanning more than 20 years, Caron held a number of positions, including member of the business excellence team for Zone America, regional business manager, Nestle Professional in Central America and country manager for Honduras, before taking up his current role in Jamaica.

"The great thing about Nestle being a multinational company is that there are so many sections within the company that has allowed me to grow. Every three years, I start a new job that is diverse with new challenges and experiences. The world of opportunities is endless with Nestle," Caron said.

So much is his love for his job that Caron quips that he has never worked a day in his life. "It is fun, that's what food is all about," he said.

In Jamaica, among Caron's main objectives is to reposition Nestle's brand power on the island. "There is tremendous opportunity in Jamaica and we are committed to Jamaica, our 'Nest'. We intend to grow the business and invest back into the society by creating shared values. This translates into proper nutrition, health and wellness, and responsibility to our consumers," he said.

Nestle Jamaica is about to construct a new corporate office and distribution centre on more than six acres of land in St Catherine.

According to Caron, the office complex will enhance the productivity of their employees and the fully equipped, state-of-the-art distribution centre will allow for future expansion.

This development, he said, will also enable the company to fulfil some of its strategic objectives through an expansion of its delivery channels beyond the Kingston Metropolitan Region.

"We will significantly increase Nestle's distribution and marketability in a targeted manner, while simultaneously providing opportunities for the growth and development of our employees and the community," Caron said.

He also envisions an environment in which the next generation that works at Nestle operates in a more comfortable environment, with the aim of creating fresh ideas in a more relaxed atmosphere.

"We need an environment where people are stimulated to think outside the box, where they can think of the kind of innovation that food involves and that is still relevant to our consumers. This is a relevant part of people's lives, our employees, our consumers, customers and our stakeholders," he said.

Caron has indicated that Nestle Jamaica has also begun to make strides in social media with some of their brands, including Maggi, Nescafe, Milo and Nestle Corporate.

Nestle Jamaica, he said, will also continue with its parent company's celebration of its 150th anniversary worldwide, working with the Global Leader's 39 Commitments Report Guide that aims to meet specific objectives, while delivering value for its shareholders and the community in which they operate.

"Our commitments help drive continuous improvement and allow stakeholders to hold Nestle accountable for delivering on its promises," the country manager said.

Caron also speaks French and Spanish and enjoys sailing, playing golf, reading and travelling. He is married and has four children, two of whom are in Jamaica with him. With his passion for serving people, he participates in several projects as a member of the Rotary Club.