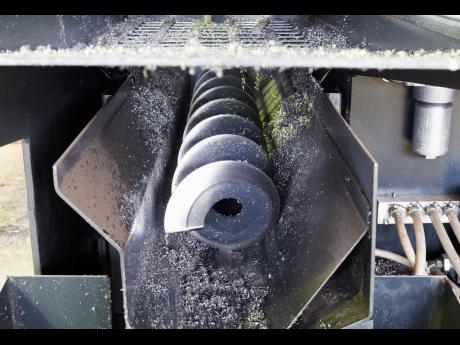 Screw and metal chips from a lathe inside a metalwork shop.

Students of at least two high schools in the Corporate Area are putting themselves, teachers, and classmates at risk as they use metalwork classes to attempt to make guns and other weapons whenever their teachers are not present.

The two schools - one a traditional high school and the other among those once dubbed as failing schools attract some students from among the Corporate Area's most troubled communities with some of the most violent gangs, and the teachers say that gangsters are creeping into classrooms.

"There have been at least two incidents since the start of the year," said one metalwork teacher who told The Sunday Gleaner that he has to be on the alert to prevent some students from using school equipment and materials to make the instruments of death.

According to the teacher, the students have been caught making ice picks, knives, and handguns.

"The fourth-form programme that I have right now, I have to rush them about it all the time. One boy specifically comes from one of those troubled areas in downtown Kingston. Him definitely want to lead the rest of the boys, showing them what to do," said the teacher.

He indicated that unlike some better-resourced schools, he does not have an assistant or a technician, and while the problem students are known, classmates are often used as lookouts to alert the weapon makers whenever he is entering the metalwork shop.

"Normally, what I do is that I watch out for any signs. I don't allow them to group together without supervision. Once you see them grouping around any of the machines, normally, is something bad that they are up to," charged the teacher.

He told our news team that since the start of the year, he has destroyed several weapons that were made by the students in his absence.

"It is really a problem, but we have only had one case that we know about of a home-made gun being found here. That was about three years ago. a boy was found making one," said another metalwork teacher attached to a Corporate Area high school, which has attracted media attention in the past for violent incidents involving students.

"It is something that we know about. It may not be so prevalent here, but it is a real problem at other schools," added the teacher.

But another metalwork teacher, who teaches at a traditional high school in the Corporate Area, was adamant that in instances where students use the workshops to make weapons, the administrators should be blamed.

"All of the rules that govern technical vocational education are the same rules for every school in Jamaica. If students are doing those things, it means there is neglect on the part of the teacher. The student realises that there is no enforcement.

"If anything should happen to that student or other students, it is the teacher and the school that will be responsible. Once a student comes to school, the school is responsible for them," said the teacher.