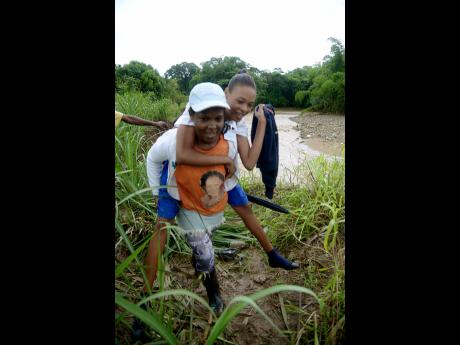 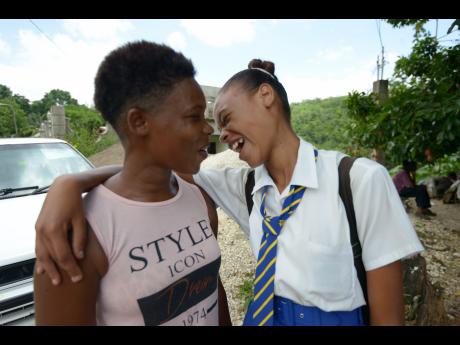 One week after 40-year-old Semone Butler carried her 17-year-old daughter on her back to prevent the child from having to walk through a flooded pathway to get to school for an external exam, the teenager blushed when a request was made for her to do it again, this time for the heck of it.

When Gleaner photographer Ian Allen captured the image, which has received praise and criticisms, two weeks ago, it was Denelia Kelly's second attempt to get to Ewarton High School for her 9 a.m. exam from her home in Redwood, St Catherine.

Despite the previous night's heavy rainfall, Denelia was out from just after 6 a.m. to get to the exam centre to sit fashion, clothing and textile in the Caribbean Secondary Education Certificate exam.

She waited for more than an hour but could get none of the cars which operate as taxis that she would normally take to go to school.

Little did Denelia know that the road had collapsed at a section known as Dover Gully and access to Redwood was cut off.

Denelia eventually gave up, and headed back to the house she shared with her mother. That was when Semone sprang into action.

Clad in her water boots, she rode on a motorbike to see the damage for herself.

When the determined mother reached where the road collapsed she discovered that her daughter could indeed get to school.

"I called and told her to put on back her uniform, and come. There is a way she can cross," said Semone.

Denelia's teachers at Ewarton were calling the students, urging them to try to reach other centres, based on a directive from the Ministry of Education for students to go to the nearest examination centre.

However, the road to Guy's Hill High School, the nearest other exam centre, was also impassable.

A determined Denelia and Semone were able to cross the main bridge linking the community as it was still intact but it had debris several feet high and angry waters roaring beneath.

That was when the decision was made that mommy would provide a safe back to move her daughter.

IT WAS THE ONLY WAY

"I refused at first, not because I was ashamed or anything. But I am taller than my mother and I said, even if I climbed on her back, chances are I would still get stuck because the water and the mud high," said Denelia.

"But I had no choice, it was the only way," added Denelia while looking shyly at her mother.

"Is my child and I would do it again. I know it was what had to be done. It's not that she didn't want to do her exams. She got ready and had to come back inside.

"I would not put her in danger, that's why I came myself to help her cross. That's when I told her to climb on my back," the petite mother of four told The Sunday Gleaner.

"After all, I have carried her all my life," said Semone as she remembered the "labour of love".

Despite the desperate measures to get to school, it was a lost cause when Denelia finally reached Ewarton; it was more than an hour and half after the exam was done.

"The teachers said only two of eight students made it on time to sit the exams," said Denelia with the disappointment clearly evident on her face as she prepared to attend a graduation practice session.