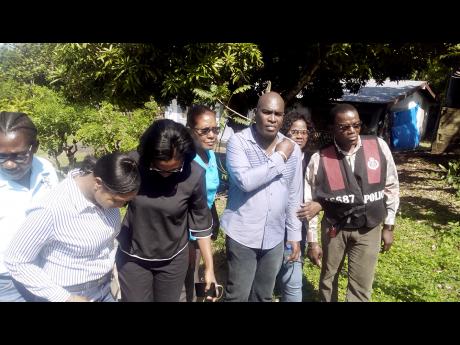 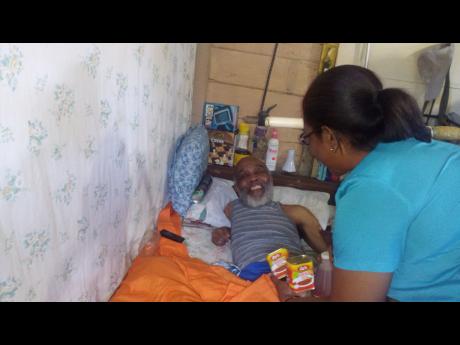 A single shot to his head at point-blank range should have left him dead, but Lorenzo McLeggon is a fighter and he was determined to live, and live he did.

But the then serving member of the Jamaica Constabulary Force has seen his quality of life decline sharply since that fateful day when the gunshot left him disabled.

McLeggon now lives in squalor in Hart Hill, Portland, not able to do much to help himself.

Last Friday, the ex-cop's life took a decidedly better turn when a police team, led by acting Assistant Commissioner Steve McGregor, visited his house and presented to him with a variety of gifts and food items, which were donated by Lasco Foods and Cal's Distributors.

"Having learnt about the plight of this former crime-fighter, we decided to provide immediate assistance," McGregor told The Sunday Gleaner.

"His living condition is less than ideal, and as such we intend to seek immediate assistance from Food For The Poor, to see how best we can go about securing a house for him.

"I understand that he is the owner of the property now occupied by him, which is one of the requirements from that agency. What is very disturbing is that he currently earns a little over $1,000 for his pension on a monthly basis," added McGregor, who heads the Police Community Safety and Security Branch.

He said his team will be seeking to engage the member of parliament to see how quickly McLeggon can be accommodated on the Programme of Advancement Through Health and Education (PATH), which will go a far way in easing some of his challenges.

"I must commend Lasco Foods and Cal's Distributors for their quick response in providing a variety of food items to this former crime-fighter. We have also donated a radio to him, and in short order we will be providing him with a television. We will continue to support our former colleague, and the members of my team are committed to the task ahead," said McGregor.

McLeggon, who joined the police force in 1972, was shot in the head four years later while on duty with an operational unit known as the S90 Squad.

The 74-year-old has tried to weather the storms since then, and he was in a jubilant mood when McGregor and his team visited.

"I am so thankful that I am still remembered," said McLeggon.

"It has been a challenging period for me, but I am just giving thanks to God. I have not had many visits, but for the first time I have come to realise that Christmas comes in February. Thanks to McGregor and his team for their kind assistance, and to all that donated food items. This will go a far way in helping my family," added McLeggon.

He told The Sunday Gleaner that at the time he was shot he was part of a team responding to a report of an armed robbery taking place at a shop near Olympic Gardens in the Corporate Area.

According to the ex-cop, when he arrived one of two gunmen sneaked up behind him and held him in a neck lock, while putting a gun to his head and pulling the trigger.

"I was rushed to hospital, where I had fragments of bullets lodged into my brain. This resulted in me being affected by epilepsy. I went on two years' sick leave, but was later retired. Since then I have been confined to a wheelchair."

He is cared for by his mother and sister, who also occupy the frail and rotted wooden building which they say leaks heavily whenever it rains.

His sister, Mertle Stanford, described him a loving and caring person, who, before his accident, took care of his mother financially.

She said the family has endured some of the worst periods of hardship since the shooting which left him paralysed from the waist down.

"It has really been difficult," said Stanford.

"There were days when I thought about giving up, but I had to be strong for my mother's sake. God has been good to us, and we considered that despite how bad our situation was, someone out there was far worse off than us.

"Today, I am overjoyed at this kind gesture on the part of the police and those who have donated to us. Words cannot express how I am feeling, as we now realise that there are people out there who care about us," added Stanford.