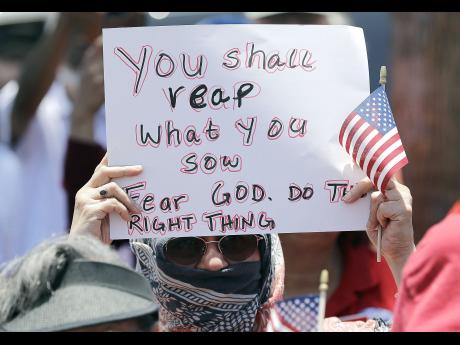 AP
A demonstrator holds a sign during a protest outside the US Border Patrol Central Processing Center.

The External Affairs Commission of the opposition People's National Party (PNP) has waded into the controversy surrounding the border crisis in the United States, which has resulted in the separation of children from their parents.

The commission said while it respects the right of sovereign states to protect the integrity of their borders, as well as to regulate immigration policy as they deem necessary and within their national interest, it deplores the recent policy approach to immigration taken by the United States.

According to the commission, the US approach has led to the deliberate separation of children from their parents without a clear plan of reunification.

"The approach runs counter to the humanitarian ethos that has long informed immigration in the United States, which has historically been the land which welcomed the oppressed peoples of the world fleeing persecution and atrocities.

"The harrowing sights and wailing of children traumatised by their separation from the protective care of their parents; and the dehumanising warehousing of children in cages send a wrong signal around the world and impairs any moral authority of the United States.

It commended the citizens of the US, who were shocked and repulsed by this zero-tolerance approach, for their collective objection and action against the policy for its manifest negative and traumatic impact on children separated and detained.

The commission applauded the Executive Order issued by the president of the United States to cease this aspect of the approach, and expressed hope that the US Government, and its agencies, will act swiftly and effectively to immediately reunite the children separated from their families.