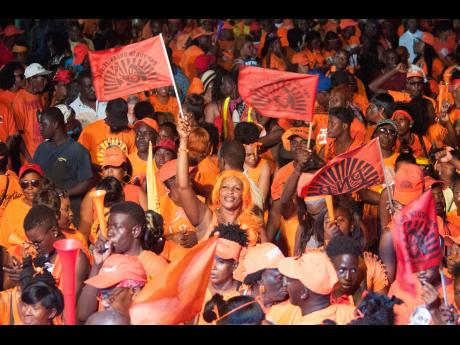 Gladstone Taylor
Comrades were upbeat going into the general election, but the failure of some members to turn over campaign donations to the treasury could have contributed to their surprise defeat.

Accusing fingers are being pointed at five senior members of the People's National Party (PNP) who are believed to have collected campaign donations and not turned them over to the party in the lead-up to the last general election.

But the party's president, Portia Simpson Miller, is not among the five.

A report from the then PNP treasurer Norman Horne, which was presented to the party's National Executive Council (NEC) meeting in July, claimed that the action of some members with campaign donations was a major problem for the PNP.

"These persons were actively in the market for what seemed to be sole benefit of their personal campaigns and collected significant amounts from members of the private sector who were earmarked by the treasury as potential substantial donors for the benefit of the PNP as one cohesive unit," said a section of the Horne report.

Now PNP insiders are claiming that Horne should have named the five, as Comrades already know who they are.

According to the party insiders, in one instance, a foreign entity contributed US$20 million to the PNP, but this was collected by a high-ranking party official and not turned over to the treasury.

In another case, millions of dollars were collected by another senior PNP member, who it is alleged told the contributors not to give any money to Horne or the party's General Secretary Paul Burke.

"One of the persons they pointing finger at is not true. That person handed over the most money as a minister. But there are others and the people told us," said the PNP insider.

"In one instance, a contributor put me on three-way (phone call) with a senior member and I heard everything myself," said the insider.

He pointed our news team to a donor who confirmed that his company made a contribution to a PNP candidate who made it clear that the money was for his campaign.

"Don't be fooled by some of the rhetoric you hear coming from some persons. One clear indicator of the guilty is when some of the most vociferous ones have gone completely silent. But we know them," said the PNP insider.

In his report, which has not yet been accepted by the NEC, Horne said: "On numerous occasions, information received by the treasury from the potential donors was that contributions had already been made to senior party members for the benefit of the party.

"However, only a few members reported or accounted in full, or even in part, for the receipt of these donations to the treasury or the party executive. This heavily affected the party's income and short-changed the party, resulting in a negative effect on the national campaign.

"Financially speaking, there was not one central bank but several banks, some of which had more resources then the treasury."

The report further stated that the necessary funding could have been strategically diverted to marginal constituencies, which seemed to have required just a little more financial support to get them over the hump.

According to Horne, due to the fragmentation of the leadership machinery and consequently the national campaign itself, there were multiple non-cohesive and disjointed campaigns being run by distinct groupings and individual members of the party.

"Had there been a cohesively executed campaign, with the treasury being the central bank and the recipient of the bulk of the resources, then it is highly likely that we would have won the election and been in government today."

This opinion was shared by the Julian Robinson-led committee which conducted a review of the factors behind the party's surprise defeat.