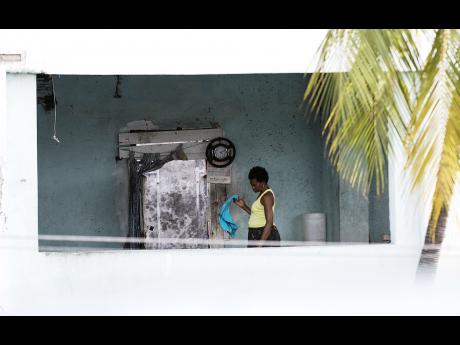 Gladstone Taylor
One of the persons believed to be squatting in an abandoned building overlooking the Supreme Court in downtown Kingston.

Squatters have taken up residence in an abandoned property metres from the Supreme Court building in downtown Kingston, with their bedrooms overlooking the parking lot of the court.

The property, which is privately owned, is currently being occupied by at least 11 persons, but that number changes from time to time as persons who just want a bed for the night, or friends of the squatters, sometimes move in.

When The Sunday Gleaner visited the premises recently, signs of domestic activity were observed in the building which is parallel to the monument for murdered children in downtown Kingston and a stone's throw away from the Kingston and St Andrew Municipal Corporation (KSAMC) office.

During the mid-afternoon visit, a woman was observed changing from a blue blouse to a neon-green one inside the abandoned building. Closer observation showed a wall clock hanging on a section of the upstairs property which is located at the corner of Temple Lane and Tower Street.

What appeared to be broken and discarded chairs were strewn in a windowless section of the building, and a piece of floral material, obviously used as a curtain, was seen hanging at a window.

Entrance to the building was through a broken slot of a closed gate inside Temple Lane.

Town Clerk Robert Hill has confirmed that the building is now occupied by squatters and said a probe is now under way,

"We have to investigate it, because we have had reports of buildings being occupied by persons who are not the owners, and by procedure we try to locate the owners first, as is the law," Hill told The Sunday Gleaner.

"We seek to find the owners particularly of those buildings that pose either safety issues in terms of their structure or construction, if they are being occupied by persons who are seemingly not the owners, or if the are occupied by homeless persons.

"That one we will have to investigate, because we find that by our own research, that it is not seemingly occupied during the day, during regular work hours. So a lot of these structures are used for illicit means, but it could be for several reasons. So we commit to investigating that one for you, in addition to what we have to do," added Hill.

He noted that a KSAMC check in June revealed that approximately 125 buildings were abandoned and located in the downtown Kingston market district.

According to Hill, the KSAMC found that many of the properties were in a state of flux, with disputes involving lawyers for the National land Agency, the Administrator General and relatives of the original owners.

The squatter-occupied property on the doorstep of the Supreme Court building is similar to one which shares a wall with the home of Jamaica's Parliament, Gordon House.