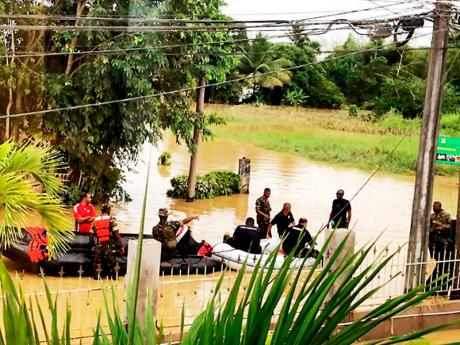 Speaking to The Gleaner on Wednesday for the purpose of warning Jamaica and other Caribbean governments, Trinidadian environmentalists have cast blame on their leaders for failing to impose laws governing plastic bottles which, they say, contributed to the recent, unprecedented flooding in the twin-island republic, following days of constant rain.

Jamaica has long had problems with plastic bottles overflowing streets, blocking drains, then ending up in the Caribbean Sea, and Trinidad and Tobago has a similar issue.

While also citing different factors which could have caused flooding in different areas, Gary Aboud, corporate secretary of Fishermen and Friends of the Sea, a non-governmental organisation, told The Gleaner that the T&T beverage containers bill has been shelved for nearly 20 years.

“Because we have no beverage containers bill, all of our plastics block the drains and increase the flooding. It is like miles of plastics!” he exclaimed.

His colleague, Lisa Premchand, who is the programme coordinator at Fishermen and Friends of the Sea, said, “The beverage container bill has been sitting in Parliament so long and there has been no action by past or present governments”.

Premchand suggested that a monetary value be placed on plastics.

“In Trinidad, we have a company that collects glass. A lot of the poorer people collect these glass bottles and they take it to the company and get money. Because of that, in Trinidad, you hardly see any glass bottles discarded on the road or in waterways.”

“Governments definitely are there for the people and were placed there by the people. There was no kind of preparatory activities by regional cooperation or by government to prepare for incoming rain. We actually saw the government people cleaning the drains during the flooding and after people were being affected. It was at that time that they were prepared to designate shelters. We need to be taking a preventative approach to these kinds of activities, rather than putting a cosmetic patch on them. That goes for everybody [in the Caribbean].”

Luckily, there have been no reports of death caused by flood waters in T&T since the catastrophe, other than a few social media posts claiming that lives had been lost. However, that was refuted by authorities.

“One of the interesting aspects of Greenvale is that they have electricity lines underground. The water was electrified and people were being electrocuted, but it wasn’t like major electrocutions. Authorities had to cut off electricity supply.  Because of that, persons had to leave their homes for shelters; they were not at home. At nightfall, people started breaking into homes to steal appliances and different things. The police had to restrict the area to a no-go zone between 6 p.m. and 6 a.m.”