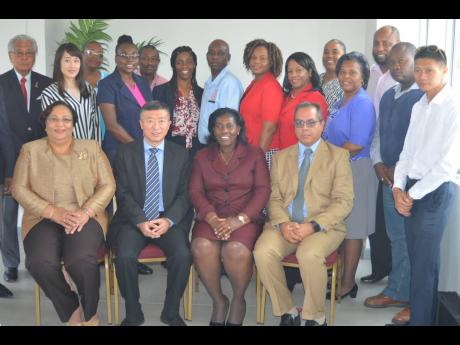 Photo by Christopher Thomas
Chinese ambassador to Jamaica, Tian Qi (second left, seated), with principal of the Montego Bay Community College, Dr Maureen Nelson (third left, seated), and members of her academic staff pose in a corner for The Gleaner’s photographer away from the displayed official photograph of Ruel Reid.

In a not-so-diplomatic quip seemingly made in jest on Monday, Chinese Ambassador Tian Qi questioned the presence of a photograph of Ruel Reid, the embattled former education minister, hanging in the boardroom of the Montego Bay Community College (MBCC) in St James, alongside those of the governor general and the prime minister.

Tian, who was attending a function at the MBCC, was getting into position to take photographs with the school’s principal, Dr Maureen Nelson, board chairman Stephen Dear, and members of the academic staff when he spotted the framed photograph of Reid.

“You need to take this down,” said the ambassador as he pointed to Reid’s picture, triggering an outburst of laughter.

“You need a new picture,” he added, before moving to his right, seemingly to avoid the former education minister’s image being captured in the pictures being taken of him accepting a gift from the MBCC and posing with the staff.

After the laughter died down, the MBCC principal said the college was awaiting a directive from the Ministry of Education as to what should be done with the photograph.

“We did contact the ministry and we were instructed to let it remain until we are given further instructions,” said Nelson. “Until we get the directive from the Ministry of Education, it will stay.”

When The Gleaner raised the issue of Reid’s photograph with a senior member of Jamaica’s diplomatic corps, the official noted that it would be replaced in short order.

Reid, the former education minister, was told to resign by Prime Minister Andrew Holness against the backdrop of damning allegations of corruption in the ministry he led.