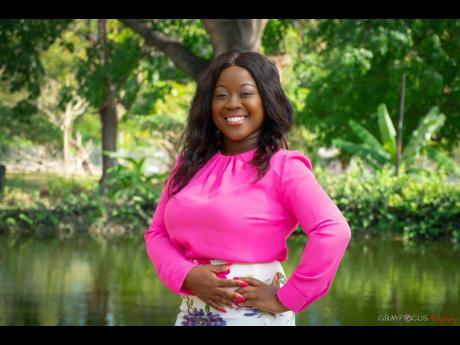 Kea Ann Codner could have easily been a statistic of someone who is stuck in bitterness, has an unforgiving spirit, wasting her life with negative emotions but for the grace of God.

Codner, who hails from High Mountain, Bog Walk, St Catherine, had to deal with the bitter disappointment of not growing up with her father.

“Throughout the years, I would struggle with resentment, bitterness, and unforgiveness towards my father. I felt that life would be better if he was playing his role,” Codner said.

In her dark moments, she gave God thanks for her grandparents who spread sunshine in her life.

Growing up in single-parent home had its challenges for Codner, but she gives credit to her mother, Courine Wellington, who did her best. Still, there were days of going to St Catherine High School with bus fare only, but grateful that she never had to go to bed hungry.

Their struggles was her motivation to excel in her studies, and that saw her being placed first in her class for most of her junior years. After leaving sixth form, she matriculated to The University of the West Indies, Mona.

“I never hesitated about getting a tertiary education even though my mother could not afford it. I had a plan to get student’s loan and with my faith in God, I would complete my studies and get a job. While others were hesitant about student loan, I knew there was no other way out for me. I needed to get accepted and stay focused,” she said.

Codner hit a bump in the road when she failed her entry test on the first attempt. She didn’t give up, but challenged God to keep His promise.

“He promised that no good thing will He withhold from them that love Him. Upon my second attempt, I was successful,” she said.

After completing university, she had an experience that changed her whole outlook on life. Codner attended a church service in 2011 and the message was about forgiveness. She was so moved, she went home and messaged her father that she forgave him.

“I forgave him and I felt free. I have also learned to accept God’s love for me. I understood who I am and now walking in my true identity. The Bible tells us that when our mother and father forsake us, God will keep us close and God has always been there.”

After university, she had to learn patience in waiting for a job. She is now employed to a top bank and has been there for seven years.

Last year July before her 29th birthday, Codner said she was in her room when she heard a voice say 29. She looked around the room and saw no one. Later on, she knew the meaning when a friend presented her with a book for her 29th birthday.

“My friend Claudia Hunter bought me two gifts. One of the gifts was Crystal Daye’s book Living a Royal Realty. Upon reading, I realised the author was in Jamaica and she helps people to birth the stories God has placed on their heart through book coaching. I reached out to her and started the programme of writing my book in three months.”

Fast-track to now and Codner has completed her book, Pretty Girl Believe in Yourself: Finding Purpose Amidst the Silence, available on Amazon. She is now a life coach encouraging young women, and is also a mentor with Flourish Mentorship, where she mentors young girls and provide guidance.

Now looking back, Codner said the rejection was necessary.

“It is through my personal and painful experiences that I wrote this book to motivate young women to fight with faith and to know that they are not mistakes. This book reveals the secrets to be a game-changer. It is a guide to develop faith, tap into your potential and be who you dream to be,” she said.