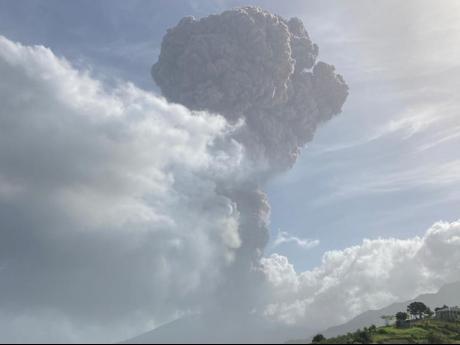 Plumes of smoke rise high into the air from the La Soufrière volcano in St Vincent and the Grenadines.

The Barbados Meteorological Service has issued a warning following another eruption of the La Soufriere volcano in St. Vincent and the Grenadines.

The country's airport, the Grantley Adams International Airport, has also been closed and will remain closed until 6:00 a.m.tomorrow.

Deputy chief executive officer, Terry Layne, said only authorised and essential airport personnel will be allowed access to the airport during this time.

“There have been reports of ash fall across the island late yesterday evening and into this morning. Saharan dust haze also remains present across the island which will continue to reduce visibility. These adverse conditions are expected to continue to affect Barbados with variations in intensity.”

As a result, residents, visitors, and marine users have been advised to take action as ash fall will cause a significant reduction in visibility, and possible respiratory problems for persons who experience difficulty in breathing.

“Persons with respiratory issues or allergies must travel with, or have close at hand, all prescribed relevant medications in case of an emergency. Marine users should stay in port, particularly if GPS is not in use on vessels. Closely monitor the forecast for critical updates. Check that livestock have enough food and water. May need to shelter livestock in heavy ash fall.”

The release added that if persons must drive they must do so slowly “as ash fall may reduce visibility. You may need to use car headlights because of the reduced visibility. Do not use the car’s ventilation system.”

Meanwhile, the United States Embassy in Barbados has also issued a Natural Disaster Alert amid the ongoing volcanic eruptions.

The embassy, which also serves the Eastern Caribbean, yesterday said that the National Emergency Management Organization (NEMO) has  confirmed several eruptions at the La Soufriere volcano with ash plumes up to 20,000 feet.

After lying dormant for decades, La Soufrière volcano, in the northern half of the main island of St. Vincent, on Friday began erupting, spewing clouds of ash for miles and forcing thousands in the red zone to evacuate.

Professor Richard Robertson, a Vincentian national, who leads the SRC team in St. Vincent and the Grenadines, cautioned on Friday that the eruptions could continue for up to weeks.

“Once it has started, it’s possible you could have more explosions,” he told a news conference in Kingstown, the Vincentian capital. “The first bang is not necessarily the biggest bang this volcano will give.”

In 1979, La Soufrière roared back to life, after the previous eruption in 1902, causing about US$100 million in damage, the government reported. No one was killed at that time. However, in 1902, more than 1,000 people lost their lives, scientists said.