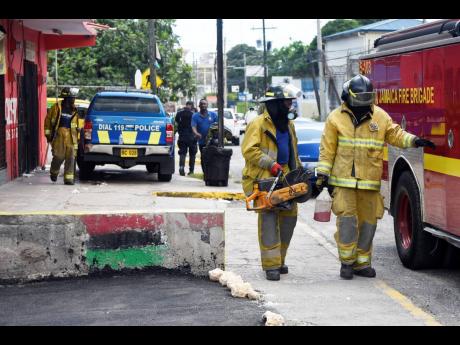 Nicholas Nunes/Photographer
Firefighters at the scene of a fire.

Councillors of the St Thomas Municipal Corporation have reached their wits’ end with what they describe as the lack of attention from the relevant authorities regarding the local fire department.

The concerns were raised following a report by the parish’s fire chief, Deputy Superintendent Horace Thomas, who revealed that only one fire truck serves the parish which consists of some 10 divisions.

In his presentation, Thomas also requested a partnership with councillors to share some of the costs associated with the installation of hydrants in their respective areas.

Laughing at the request, councillor for the Morant Bay division, Rohan Bryan, said: “That must be a joke because I don’t know what assistance you can get from councillors at this time. The fire hydrants dry like chips. Nothing is happening.

“There was fire in Bath last night and by the time the truck reach, everything was burnt to the ground. Find a way to reach out on behalf of the people in St Thomas and our fire brigade for them to put more resources here and [do] not count on councillors, because we don’t have it.”

The fire chief pointed out that the parish is in line to benefit from a shipment of new units expected to be in Jamaica in short order.

“We are very limited in terms of response because of the age and type of unit we have now, but I can say it should be rectified shortly. There are some trucks that should have arrived already but they have been delayed. I will hope that we will get some of those units,” he said.

Unsatisfied by the promise, councillors retorted that they have been anticipating new trucks in the area for a long time.

“We’ve been hearing this for as long as I can remember … over 10 years now. The fire trucks came to Jamaica and St Thomas get none,” responded councillor for the Cedar Valley division, Marsha Francis, who demanded that a letter be written to the local government ministry to ensure that the parish is not left out of the distribution.

She continued, “When the fire chief is reaching out to us as councillors to help fix these fire hydrants, I understand the pressure that he’s undergoing. What are we doing about this fire situation? Two weeks ago, I was away from home and I got a call that there was a fire close to my home. I called the department and there was no truck available. It’s a good thing that I had a long hose that could reach over the fence to out the fire. A parish like St Thomas, closest to Kingston and St Andrew, and we don’t even have a proper fire station. People are losing their homes in such a time like this and it can happen to anyone of us.”

In addition to his colleagues’ plea, councillor for the Dalvey division, Michael McLeod, shared that he had requested that a fire station be built to support the eastern end of the parish.

St Thomas is served by two stations, one in Morant Bay and another in Yallahs that is currently being rebuilt.

According to McLeod, “I made the request from 2007 and the councillor before me was making the same request. Whenever the fire brigade response team comes this side of the parish is just to come cool down … never to out, because everything always flat by time dem reach.”