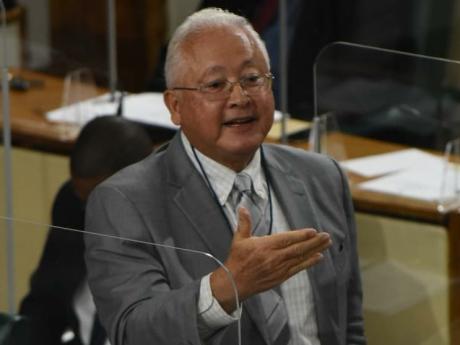 Chuck: RGD will be an office created within the National Identification Registration Authority to be known as the Office of the Registrar-General.

The Registrar General's Department (RGD) will cease to exist as an executive agency, once the National Identification Registration Authority (NIRA) becomes operational.

Justice Minister Delroy Chuck made the disclosure in Parliament on Tuesday, announcing that the RGD will be an office created within the NIRA to be known as the Office of the Registrar-General.

The NIRA is the statutory body with responsibility for civil registration and the enrolment of persons under the proposed National Identification System (NIDS) law.

It will also be responsible for the collection of data as prescribed by the statute.

Chuck said the Office of the Registrar-General, under the control of the NIRA, will be accountable for the current roles, responsibilities, tasks and duties of the RGD, including those under the Registration (Birth and Deaths) Act, Children (Adoption of) Act, Marriage Act, Muslim Marriage Act, and the Hindu Marriage Act.

The RGD was opened in Jamaica in 1879 with its core mandate to register, store and maintain safe and accurate records of all life events occurring in Jamaica and its waters.

The minister said the NIRA is expected to comprise nine individuals appointed by the Governor-General on the advice of the prime minister after consultation with the Leader of the Opposition.

Those selected, he said, must satisfy the qualification requirements, which among other things, include a fit and proper regime.

The NIRA, the minister said, will comprise a mixture of Jamaicans with the requisite experience, knowledge and representation in information technology and security, private sector, religious interests, and public service.

Each member is expected to serve a term of five years but will be eligible for re-appointment.

Meanwhile, a National Identification and Registration Inspectorate is to be established to provide oversight for the NIRA to ensure that it operates within the bounds of the NIDS legislation.

Its functions will be carried out by the Electoral Commission of Jamaica (ECJ), which is expected to direct and advise the NIRA on its compliance, Chuck told the House.

“We have a reputable body that will be the inspectorate overseeing an already secure system. So this is a double layer of security to ensure that anyone who registers in the NIRA can feel comfortable and can have trust and confidence in the system that every opportunity and safeguard has been examined, assessed and used to ensure that the NIRA is protected,” said Chuck.

He noted that the decision to add the ECJ as an oversight body was centred on its reputation as an entity with a wealth of experience and knowledge as it relates to identity information.

The ECJ is an independent body, which is only accountable to the Parliament.

"Utilising the ECJ will leverage existing and trusted resources and save on limited resources,” the minister said.

Chuck said this level of independent oversight is necessary for the special nature of the NIRA.