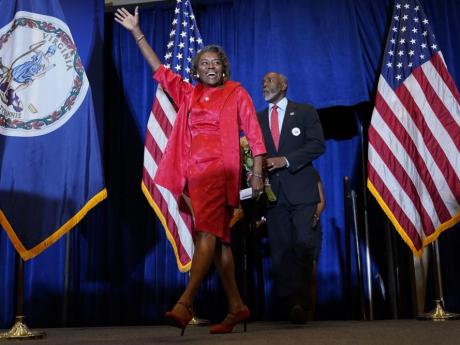 Ayala also would have been the first woman of colour to hold statewide office if she had won.

The Republican rocketed out of political obscurity earlier this year when she won the GOP nomination on the strength of a campaign photo in which she posed holding a military rifle.

Her role as a tiebreaking vote in a closely divided state Senate has become even more important given GOP victories in other races.

If Republicans do gain control of the House, the only thing blocking them from total control of state government is a narrow 21-19 Democratic advantage in the state Senate.

Senators are not up for reelection until 2023.

Democrats have been particularly concerned about abortion legislation.

Ayala made supporting a woman's right to an abortion a key issue in her campaign, noting that the Senate is already an even 20-20 split on the issue.

Sears has long opposed abortion, something she links to her Christian faith.

“I'm a Christian first and a Republican second. I don't want to hear about your economic policies and you're going to build the country if we have to kill babies along the way,” she told an interviewer in 2019.

A former Marine, Sears had a brief stint in electoral politics 20 years ago as a one-term delegate in the General Assembly, representing parts of Hampton Roads.

Her return to politics after a two-decade absence began when she served as national chairperson for Black Americans to Re-Elect President Trump.

Early Wednesday, Sears stood with her family in front of cheering supporters at a victory party in Chantilly, saying, “What you are looking at is the American Dream.”

Throughout the race, Sears also highlighted her background as a Jamaican immigrant, campaigning against illegal immigration and rejecting the notion that the nation is plagued by systemic racism.

“In case you haven't noticed, I am Black and I have been Black all my life,” she said.

“But that's not what this is about. What we are going to do is we are now going to be about the business of the commonwealth. We have things to tend to.”

She said she will work to fully fund historically Black colleges and implement Youngkin's agenda.

“He's going to get rid of all kinds of taxes,” she said.