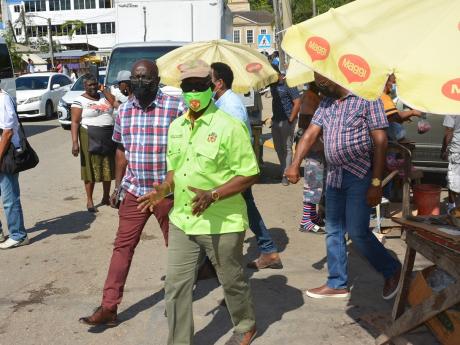 The town of Lucea in Hanover has been chosen to be a part of the Ministry of Local Government's 'Paint the City, Paint the Town' Project.

The beautification initiative forms a part of the Government's plan to further drive the development of rural Jamaica and is to be executed over a three-year period.

Portfolio Minister, Desmond McKenzie, conducted a tour of Lucea on Friday where he told journalists that Hanover is among five parishes across the country that are to take part in the rural project.

He said the selected towns and districts in these parishes are to benefit through employment, infrastructure, and other improvements under the initiative.

“We are going to put in a recreational park just in front of the Hanover Municipal Corporation building and give the place a facelift, so it can lift the spirits of the people [and] give some energy and life to the town,” he added.

The local government minister said the corporation will be engaging private establishments to take part in the holistic initiative.

He noted that he will be back on Wednesday, February 16, to officially launch the project for Lucea and Hopewell in Hanover.

“Rural development cannot be done overnight. We have to know what it is we are up against, and that is why it is important that we conduct the surveys and then move in to do the development over a period of time,” McKenzie explained.

In the meantime, he pointed out that the Government is looking at plans on how to alleviate the traffic congestion in Lucea.

“We are also looking at converting the one-way in Sir Alexander Bustamante Square into two lanes of traffic as a means of alleviating the traffic congestion in the town of Lucea,” he said.

“So, I want to use the opportunity to urge the residents of Lucea to be a little patient with us. What we are doing is going to take some time, but for now, there are some low-hanging fruits that we can pick,” he added.