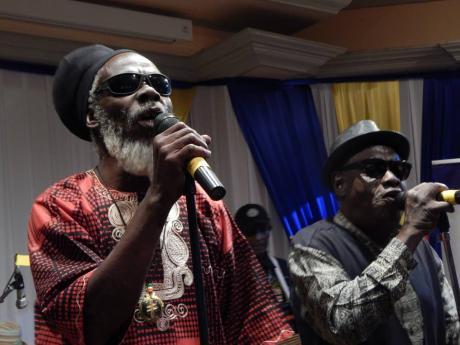 Jamaica's music industry has been left heartbroken and angered by the news that Donald 'Tabby' Shaw, the lead singer of the iconic trio Mighty Diamonds was killed last night in a drive-by shooting.

Shaw, 67, was among a group of persons on McKinley Crescent in the St Andrew South Police Division who came under attack.

Three other people were shot in the drive-by attack.

About 'Tabby' Shaw and the Mighty Diamonds

1. The singer-songwriter has dedicated five decades to music

2. He was a part of the Mighty Diamonds with more than 40 albums.

3. Last year, Mighty Diamonds comprising Tabby, Lloyd 'Judge' Ferguson and Fitzroy 'Bunny Shaw' were bestowed with the Order of Distinction (Officer Class) for their contribution to the development of Jamaican music.

4. The Mighty Diamonds received their breakthrough in the mid-1970s with the song 'The Right Time' and were signed to Virgin Records before releasing their debut album Right Time in 1976.

5. The group gained fame with singles 'Country Living', 'I Need A Roof', and 'Pass The Kutchie', which was one of the tracks on the 1981 album Changes produced by Gussie Clarke.

Several members of the music fraternity have hailed Shaw.

Gramps Morgan, Grammy award-winning singer
It all seems like a very bad dream or may I say a very long nightmare that will not end. My heart is in pain (once again) to hear that someone who I know well, has passed and in this way.

Mikie Bennett, Grafton Studios owner and producer
Singing came so naturally to him that sometimes, he didn't need to put any extra effort to make a hit. From my experience as a producer, the only thing that separates a good vocal from a great vocal is a nudge, and all he would need is a nudge sometimes. He was definitely one of the golden voices of our era of musicians. It brought a new thrill and excitement to me, who at the time was young in the business, to see him work. Tabby was really a special person.

Gussie Clarke, producer
Tabby was one of the humblest humans one could ever meet.

Dr. Karen R. Green, Former Jamaica Federation of Musicians Executive Member
The industry has lost a giant who will be hard to replace. His senseless killing once again highlights the need to curb gun violence not only in Jamaica but elsewhere as well. As a former executive of the Jamaica Federation of Musicians. I join the fraternity in mourning his death. It is my hope that the community will come up with a fitting tribute to this legendary musician.