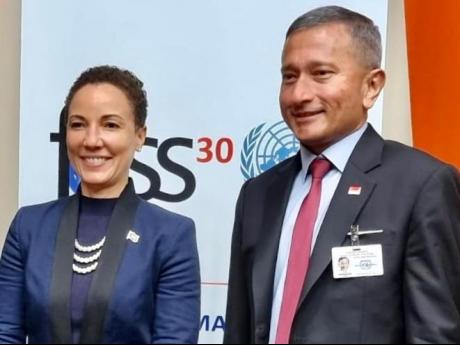 The Republic of Singapore has affirmed its support for Jamaica's candidature for the post of Secretary-General of the Commonwealth.

The Government expressed confidence that “with Minister Johnson Smith's strong credentials and leadership experience, she is well placed to lead the Commonwealth to greater heights.”

In a letter of appreciation addressed to the Singaporean Foreign Minister, Vivian Balakrishnan, Johnson Smith conveyed her thanks for the expression of confidence in her to lead the Commonwealth.

The Jamaican and Singaporean Foreign Ministers recently had an opportunity for a bilateral engagement in New York City.

They committed to continue strong bilateral and multilateral engagement on issues of interest to their two countries, including those within the family of Commonwealth Nations.

Additionally, Johnson Smith was a special guest panellist at the Forum of Small States (FOSS) Informal High-Level Round Table on “Small States, Multilateralism and International Law”, chaired by Singapore.

Johnson Smith is pleased that her candidature continues to receive very strong support and has re-affirmed her commitment to “lead and manage transparently and efficiently the responsibilities entrusted to the Commonwealth Secretariat, working within an effective results-based management framework.”