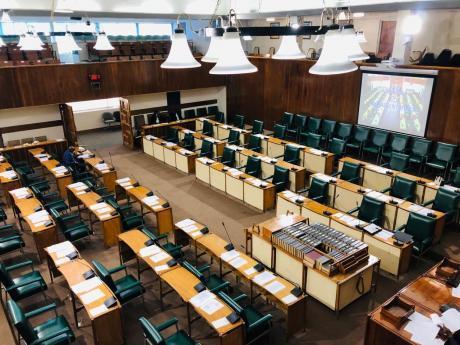 A view inside the House of Representatives. -File photo.

The Holness administration is facing embarrassment this afternoon after a huge blunder on Tuesday when it tabled the wrong regulations for the State of Public Emergency for St Catherine.

The (No.2) Regulations was the incorrect document that was tabled in the House of Representatives on Tuesday.

Leader of the Opposition Mark Golding has called the situation “messy”.

Golding told The Gleaner that he received a call from National Security Minister Dr Horace Chang earlier today telling him that the regulations for the State of Public Emergency that were tabled Tuesday in Parliament were incorrect and did not include changes that the government had intended to make.

Golding, a former minister of justice, said he would have expected that the Chief Parliamentary Counsel would send the proposed regulations, having received the necessary input from the attorney general's chambers, the Ministry of Justice, the Ministry of National Security and all stakeholders who commented on it.

He said that once those have been finalised, as a draft, the document would then be sent to the printers who would print the regulations.

After that process, Golding said that the regulations should be reviewed before they are tabled.

“I don't know what has happened in this instance but to me, it's just an example of bungling on the part of the Government when it comes to how they handle legislation. It is an embarrassment.”

Golding said he was reviewing what was tabled on Tuesday and had already identified serious issues with it in terms of non-compliance with the principles that have been outlined in the judgment of the Constitutional Court in the Roshaine Clarke ruling.

Last Friday, the court ruled that the state of emergency that was imposed in St James in 2018 infringed on Clarke's rights under the Constitution and declared the Emergency Powers Regulations unconstitutional.

The opposition leader said after the constitutional court handed down its ruling, he called for the Government “to include us in discussions to try and settle a way forward that is in keeping with the constitutional rights of the people".

“I would have thought part of that would have been to send us the draft so that we could have at least given them the benefit of our views on that but they have not done so.”

Golding said that the opposition spokesperson on justice, Donna Scott Mottley, had asked the Minister of Legal and Constitutional Affairs for a copy of the regulations from Friday but to date she has not received the document.