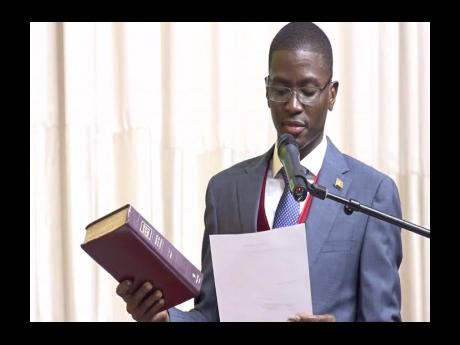 (CMC) - Attorney Dickon Mitchell was sworn in as Grenada's ninth Prime Minister on Friday, pledging to end nepotism, reform the electoral system and work for the betterment of the tri-island state.

Mitchell, 44, who led the opposition National Democratic Congress (NDC) to a 9-6 victory in Thursday's general election, took the oath of office before Governor General Dame Cecile La Grenade in the presence of his grandmother, his two children and supporters of the party.

He said a collective approach would be needed to deal with the many problems confronting Grenada, Carriacou and Petite Martinique.

“Those challenges require us to collectively as a united people. The boxing match is over, the referees have ruled and as the champion it is our job to govern on behalf of all of the citizens of Petite Martinique, Carriacou and Grenada.

“I wish to assure the nation that under my leadership, the National Democratic Congress must lead by example by taking a united citizens approach to our governance. It does not mean that we do not have to make tough but difficult decisions and often times that's the hallmark of leadership,” said Mitchell, who in October took over the reign of the NDC following the party's disastrous outings in the last two general elections when it was trounced 15-nil.

He told the ceremony that when those decisions are required “we will make them but we will ensure that we can explain, consult and justify to our people why we are making the decisions”.

Mitchell, who had been critical of the Parliamentary Electoral Office in the run-up to the general election that his predecessor, Dr. Keith Mitchell had called ahead of the constitutional deadline of March 2023, said the victory does not mask the problems at the institution.

“I will not be a hypocrite by suggesting that I was always happy with the Parliamentary Office or for that matter the office of the Supervisor of Elections or some of the challenges we faced, but at the end of the day I think we can conclude…that all in all things have to be looked at” and that the will of the people has been demonstrably shown.

“Having said that I will not also be a hypocrite by indicating that we believe we need to significantly strengthen our electoral process. It is in dire need of reform, it has to function to serve the people, it has to be service oriented, it has to be efficient and it as to be a system that encourages our citizens to vote rather than discourages them.
“And so it is certainly one of the main issues that we will seek to immediately address so that we can ensure that our democracy is strengthened for generations of Grenadians to come”.

Mitchell said he was urging Grenadians to be part of the transformation of the country and that while the members of the Cabinet and portfolios will be known soon, such a task will be undertaken on a merit basis.

“We would not move forward as a people,” he said, if appointments to key government institutions, boards and other services were done on a party loyalty basis.

He has vowed to break the cycle of nepotism under his administration and was urging all Grenadians, who in the past had shied away from serving the country to come forward as the “doors are open.

“If you believe in serving your country and you have the skills…we need you,” he said, adding “we need fresh faces with innovative ideas driven by the common desire  to make our place a better place”.

During his address, Mitchell confirmed he had held talks with the former prime minister, who had initiated the call earlier on Friday and that the discussions centered on the need to improve Grenada, Carriacou and Petite Martinique.

“There was no suggestion that he was not magnanimous and I want to publicly thank him for doing so and he indicated that he wanted that we spoke privately before he made any public statements. So to him and his fellow colleague Members of Parliament, I extend my best wishes and congratulations and I will ensure that they too work on behalf of the people who have elected them to serve as members of Parliament”