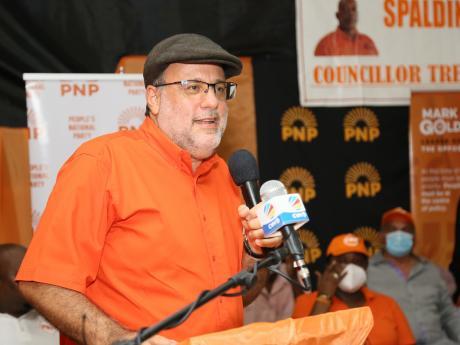 Golding said he will be writing to Attorney General Dr Derrick McKoy on Monday to outline his party's position.

The Opposition People's National Party (PNP) says it will not support regulations the government has proposed to fully implement the St Catherine state of emergency (SOE) because they are "not compliant with the constitution".

"Based on our review, those regulations do not past muster... and there are amendments that have to be made to them before we will ever support them," said Golding.

He did not give any specific provision that he claimed was not constitutional.

Golding said he will be writing to Attorney General Dr Derrick McKoy on Monday to outline his party's position.

The St Catherine SOE was declared on June 17 but after 14 days, the government will need support from the Opposition if it wants the measure to be extended.

The government has the numbers to carry the motion in the House of Representatives but it will need the backing of at least one Opposition member in the Senate.

The government proposed the new SOE regulations in the House last Thursday after admitting that ones introduced two days earlier were not correct.

Recent court rulings on past SOE regulations have forced the Holness administration to revise the procedures to comply with the Constitution and Jamaicans' rights to liberty and freedom of movement.

Deputy Prime Minister and Minister of National Security Dr Horace Chang says a probe has been launched into the tabling of the wrong resolution.

He also said persons currently detained in since the SOE declaration have been arrested under the Jamaica Constabulary Force Act and not under the regulations.

An upsurge in murders triggered by an internal feud in the One Order Gang prompted imposition of the SOE in St Catherine, the government said.

Under states of emergency, members of the security forces get extraordinary powers that impact people's fundamental rights.

Members of the security forces may search places without a warrant and arrest and detain people without the usual constitutional constraint of having to quickly take detainees before the courts for hearings or bail.