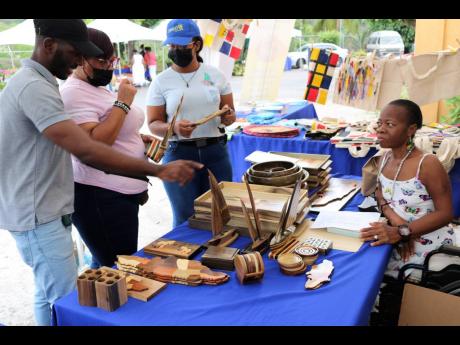 Christopher Serju
Development officer for the Jamaica Association on Intellectual Disabilities, Gavane Ferguson, assists Josephine Hamilton (second left) and her granddaughter to select one of the many attractive craft items on display during a visit to one of the booths at the craft and farmers’ fair held at the Randolph Lopez School of Hope, 7 Golding Avenue, Kingston 7, on Saturday. Looking is craft vendor Sophia Sutherland.

FOR DEVELOPMENT manager at the Jamaica Association on Intellectual Disabilities (JAID), Gavane Ferguson, Saturday’s craft and farmers’ fair was all about creating visibility for the textile art, craft, jewellery, woodcraft, plants and crops created and produced by members of the association.

The JAID is on a mission to take the creations of these persons beyond the walls of the Randolph Lopez School of Hope at 7 Golding Avenue, Kingston 7, as well as the other schools in the network of education centres it manages, across the island.

“Much more needs to be done. We need more visibility so that people can recognise and understand what intellectual disabilities are all about, and in so doing, we hope that they will be more inclined to offer their support for our programmes in a more sustainable way,” Ferguson told The Gleaner on Saturday.

The problem for persons afflicted with intellectual disabilities, Ferguson explained, is that at first glance, some do not show any physical sign of a disability, while in the case of those with Down’s syndrome, there may be physical signs. Support for their entrepreneurial initiatives, which entail clothing, jewellery and practical gifts items, would be one way to start.

Ferguson also wants the Government to provide more assistance and follow-up for persons after they graduate and exit the school system. Most of the times these graduates are unable to find jobs on their own and have to stay at home with their parents and guardians, while their interaction with the wider society is restricted. As their parents get older and become less capable to care for them, these children with intellectual disabilities are forced to fend for themselves.

“Most of the time they are ill-equipped to properly care for themselves, and because they are not interacting with neighbours and the general community, people around them are not aware [so] that they might help,” Ferguson explained.

For Saturday’s event, some of the produce on display were produced in greenhouse on the property, with neighbourhood farmers strongly supporting the effort. This continuing and expanding integration with the wider society in a more sustainable way is essential to the survival of persons with intellectual disabilities. However, the JAID has not been able to forge any partnership with any of the well-established art and craft outlets and markets for its clothing line, CHUPSE.

Saturday’s event was also an income-generating opportunity for the JAID members, for which telecoms Digicel provided well-needed support. The Japan International Co-operation Agency continues to provide strong support to the JAID, but the charity would appreciate more support from Jamaicans, according to Ferguson.

“Our craft items are not yet in any established outlets, which is why these events are so important for us. What we are trying to do is to network with individuals and organisations to take the message about what we are doing and trying to do to help our members because the craft is very good work and the farm crops are very good produce.”