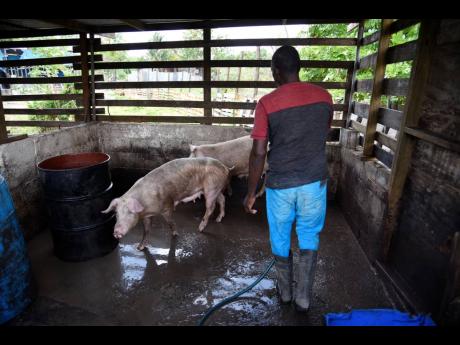 Nicholas Nunes/Photographer
A farmer attends to his pigs on his farm in Seaview Gardens, St Andrew.

Agriculture and Fisheries Minister Pearnel Charles Jr is urging pig farmers to collaborate with stakeholders to protect the industry from diseases such as the dreaded ASF virus that has the potential to wipe out the animal population.

Charles Jr, who was addressing the recent annual general meeting of the Jamaica Pig Farmers’ Association (JPFA) at the Bridge Palm Hotel and Resorts in Osborne Store, Clarendon, said it is “essential” for farmers to communicate among themselves about the diseases that are affecting the industry locally and regionally.

“They have the potential to wipe out an industry and erode decades of hard work. We must be proactive in our effort to implement measures on the farms to protect the investments that you have made over the decades,” the agriculture minister warned farmers.

ASF is a virus, often fatal, which affects both domestic and wild pigs. The disease, though harmless to humans, is highly transmissible between infected pigs and food made from infected pigs and can survive months in the environment.

With no vaccine or treatment available to fight the disease, prevention relies heavily on biosecurity measures and the collaboration of all stakeholders in the industry.

Biosecurity is crucial to both commercial and small-scale pig production for preventing the introduction and effectively controlling the spread of ASF. Basic biosecurity at the farm level includes segregation, disinfection, and cleaning.

In recent months, the Caribbean Agricultural Research and Development Institute (CARDI) has warned that the African Swine Flu (ASF), if not combated, will have a “horrendous impact on the pig industry and the livelihood of those involved in its production”, adding that pork meat is one of the primary sources of animal protein.

Pointing out that the disease poses a threat to the sustainability of the global food supply chain, CARDI said it is a “serious problem” to food security in the region, and the disruption may also lead to dietary changes in the population, which can also increase food import bills.

Consequently, Charles Jr said that stakeholders must be “deliberate” to safeguard the investments made in the sector and implement biosecurity measures.

“We can’t afford for it to be wiped out. We must be proactive. Stick to the measures and ensure good animal health,” he advised.

The agriculture minister said there will be greater collaboration with pig farmers and other stakeholders to ensure that the industry continues to grow and that the quality of animals improve.