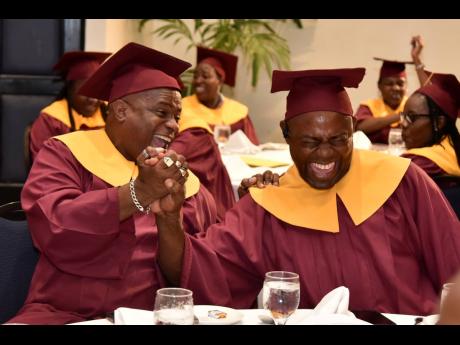 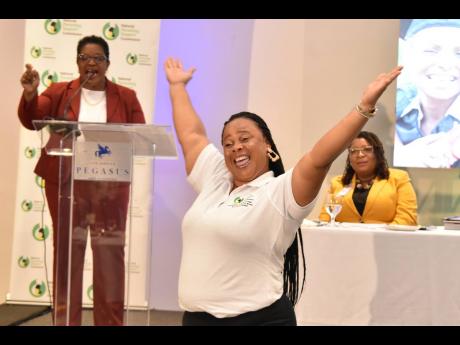 Kenyon Hemans/Photographer
Kayshia Kerr (left), CEO of the National Parenting Support Commission, announces Nicole Ramsay (foreground) as the top parent mentor for the organisation in Jamaica while Anita Bailey, community relations education officer in the Mandeville office of the Ministry of Education, looks on. They were attending the commission’s graduation ceremony held at The Jamaica Pegasus hotel in St Andrew on Tuesday.
1
2

When the National Parenting Support Commission (NPSC) launched its helpline in April 2020 for troubled parents burdened by the pandemic, Nicole Ramsay never hesitated to volunteer her time to take calls.

Ramsay has been a volunteer with the NPSC for the past eight years, and her involvement only grew following the helpline’s launch.

She told The Gleaner Tuesday that she was blown away by the number of calls she received during her tenure and was equally amazed by the poor state many Jamaican parents were in.

“It was challenging, because I never knew that so many persons were losing their mental state and mind and I was touched. I was wondering why we have so many persons out there with so many issues,” Ramsay said.

Her commitment to answering those calls and helping parents in need led to her being named the NPSC’s Top Parent Mentor for 2022.

She received the special honour on Tuesday, at The Jamaica Pegasus hotel in New Kingston, during the National Parenting Support Commission’s Parent Mentorship graduation ceremony.

At the event, the audience was told of an instance where a male parent from St James, who shared that he was ‘overburdened and felt like dying’, called the line in Kingston around 4 a.m. during curfew hours for help. It was Ramsay who answered and made the necessary urgent calls to get an ambulance to attend to him. That was one of several which prompted the judges in making her their pick for the commendation.

Ramsay told The Gleaner that she never expected that form of recognition as she was merely volunteering and giving back to NPSC.

She says that, eight years ago, she was not as compassionate a parent as she is today. She credits the programmes from the NPSC which she says changed her life for the better and have made her a different woman.

“When I started, I wouldn’t see myself as an effective parent, because some of the [correct] stuff I wasn’t doing. I wasn’t attending like PTA meetings. I didn’t care. I usually go to dance. That was more important to me. But going into the programme, it has changed my life a whole lot, and I see what was missing in my life, and I started to act effectively” she explained.

Ramsay said that there was a time that she was not very supportive of her children to the extreme and nurturing them in the best way possible.

She says these qualities, she learnt from the NPSC, and not only started applying it in her home, but now shares that knowledge with other parents during volunteerism.

“What I always do is find the parent and to make sure we try to solve any issues that they are having with a troubled child, recommend them to NPSC or CPFSA; anyone of the places we know they can get counselling from,” Ramsay said.

“I like what I do best. [That is] mentoring our parents and it was awesome. My journey was an awesome one, and I will continue to serve as a great parent mentor,” she said.

Formerly a bar worker, Ramsay says the programme has changed even her perspective on the type of job she does. Now she has chosen full-time volunteering over bar keeping.

As a parent volunteer, Ramsay now hosts one-on-one with parents in the troubled inner-city community where she resides.

Recalling the early days, Ramsay says she was introduced and recommended to the NPSC by Citizen Security and Justice Programme (CSJP) representatives, after joining programmes they had initiated. They had early identified her as a leader in her community with a good attitude to the vocation. At the NPSC, she did 20 modules of training while the average volunteer does 13.

So radical was the turnaround that she was also named and awarded for two consecutive years as Parent of the Year during the period that one of her children attended the Rollington Town Primary School.

“That [award] pushed me to want to do more and to serve more and serve the people of my country, because we have a challenge where parenting is concerned, and going into the 14 parishes of Jamaica, I get to like the programme more,” she said.

The NPSC – an agency of the Ministry of Education and Youth – has been mandated by the Government of Jamaica to transform and empower parents across the island, and this is a mission Ramsay takes seriously and personally.