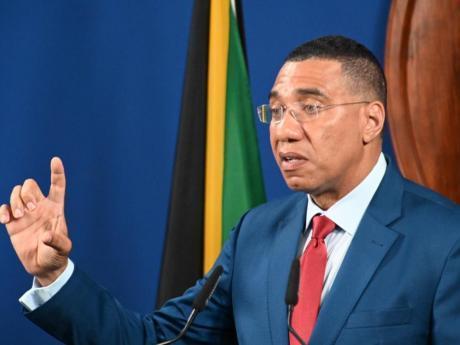 The Government will not bail out any failed financial institution, Prime Minister Andrew Holness has declared.

He was speaking at the annual Jamaica Stock Exchange capital markets conference on Tuesday night.

“Were we to do that it would send a bad signal to the banks and the investment houses that they can be negligent and expect the coverage of their negligence. That took us into a crisis, which took us decades to get out of, and made the entire country poor,” he said.

The bailout of the failed financial sector in the late 1990s rescued the savings of countless depositors in what some academics called the socialising of debt.

It, however, crippled the Government's ability to spend on activity that would help grow the economy.

At that time, Jamaica's debt was one-and-a-half times larger than all the things produced in the island combined.

Now, it's just about the size of all things produced, with just a bit to spare on the capital side of the budget.

Holness' reference to the past crisis that crashed the financial sector comes amid reports of an alleged $3-billion fraud at investment firm Stocks and Securities Limited (SSL), which has made international headlines, mainly because one of the persons affected is retired international sport celebrity Usain Bolt.

As he spoke, Holness seemed to sense a bit of unease among sections of the audience.

“Do not be afraid to clap," the PM said.

"I know I have to deliver some uncomfortable truths, even in this audience. It is not a fully agreed position, but we must learn from our past crisis,” he said.

The JSE Regional Capital Market Conference 2023 will run until Thursday at the Jamaica Pegasus Hotel under the theme 'Capital Markets Redefined: Achieving the Impossible'.