No sweat for Safa 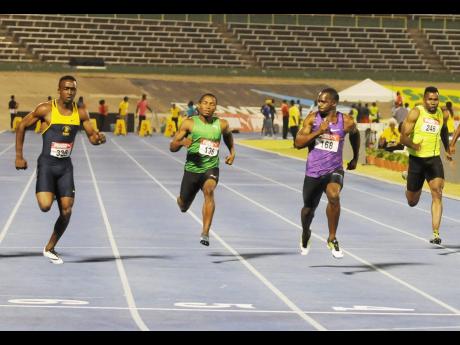 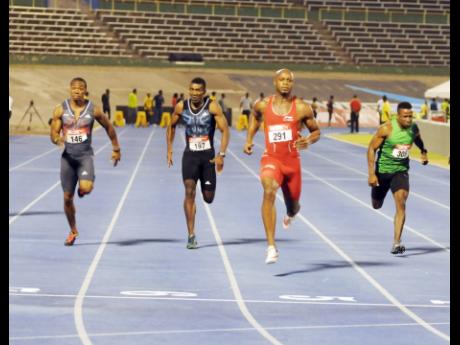 Asafa Powell (second right) cruising to a 9.98 seconds win in his men's quarter-final 100-metre heat at the National Stadium last night. Yohan Blake (left) was second in 10.24 just edging out Kemarley Brown (not in photograph). Brown was awarded the same time. Also in photograph are Mario Forsythe (second left) and Kimmari Roach (right).
1
2

Asafa Powell entered the Jamaica Athletics Administrative Association (JAAA)/Supreme Ventures National Senior Championships as the overwhelming favourite for the men's 100m title, but unlike days gone by, the sub-10 machine is hardly breaking a sweat over the expectations.

With Usain Bolt a non-starter at this year's championships, Powell, the fastest Jamaican this year with a 9.84 seasons best to his credit, is considered a cinch for his first national title since 2011, but this time around, the sprinter, whose mettle has been questioned in the past, says he is a new man, as he looks ahead to today's semi-finals and final.

"It was a very good race. I wanted to win as easy as possible ... I felt really good, quite comfortable, and that was key," said Powell shortly after stepping off the track after his 9.98 seconds win. "Tomorrow (today) is going to be a bit more competitive, so I am looking forward to that.

"This is a new me, I'm just enjoying it - no big deal. Over the years, I used to make it a big deal and put too much pressure on myself. Now I'm just going to relax and do what I have to do," added Powell, who said he is looking forward to winning again at these championships.

Yohan Blake, running in his second 100m since July last year, recovered from a slip at the start of the race to finish strongly in 10.24, the same time given to third place Kemarley Brown.

"I have to give God thanks. To come back like that tells me that I am packing some serious power. I am not far off. It's going to be much better tomorrow. Mentally, I am getting there, but physically, I am definitely ready," said Blake.

Last year's champion, Nickel Ashmeade, is also safely through to today's semi-finals, which get under way at 7:10 pm, winning his heat in a time of 10.12, the same time that Nesta Carter ran on the way to winning his race. Kemar Bailey-Cole and Andrew Fisher were second to Asafa Powell in terms of times registered in qualifying, with the pair both crossing the line in 10.05 in their heat ahead of third-place Jason Livermore, 10.06.

There was no action among the women, with the organisers sending the event straight to the semi-final stage after receiving only 20 entries. The women's 100m semi-final should feature the likes of world and Olympic champion Shelly-Ann Fraser-Pryce and Veronica Campbell-Brown.

Defending champion Roxroy Cato and Olympic finalist Leford Green were both left a little surprised as schoolboy Marvin Williams - the World Youth Champion from 2013, snuck between them to take their heat in a personal best 49.90, with Cato stopping the clock at 49.96 ahead of Green, 49.97, in a close and exciting finish.

Cato told The Gleaner that he was satisfied with his run, underlining that the objective was simply to qualify for tonight's final (8:20 p.m.) and defend his title when it matters.

"I just came to qualify. I was holding back for the final and I will certainly produce a better race tomorrow (today). The main thing is to be in the final, and I am there," Cato said

Another schoolboy, Jaheel Hyde, 49.83 - the reigning world junior champion - stuck with eventual winner Annsert Whyte up to 250m but was overpowered to the line by the Commonwealth Games finalist, who posted a season best 49.00 for the win, with AndrÈ Clarke making a last-minute rush for the line to finish third in 49.87.

Javarn Gallimore seems to be coming back from a couple seasons' worth of injury setbacks, winning his heat in a time of 49.94 ahead of another injury-plagued athlete, Josef Robertson, 50.45, and Isa Phillips, 50.47.

In the opening heat in the women's 400m hurdles, Janieve Russell, the 2014 Commonwealth Games bronze medallist, was easy in winning with a time of 55.59, which made her the fastest qualifier heading into today's final, with Shevon Stoddart, 55.74, taking second place ahead of Samantha Elliott, 56.42, in third.

The second heat was a bit slower, with Ristananna Tracey, producing her best effort of the season so far with a 56.22 win despite a less-than-smooth execution. Rushell Clayton finished strongly to take second place with a time of 56.53, while Danielle Dowie, 56.81, also ensured that she has a lane in the final later on with a third-place run.