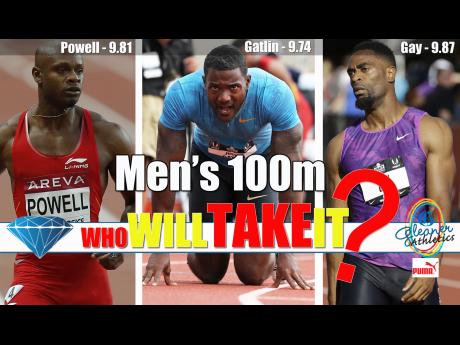 Here we go! It's time for the biggest race of the year! Justin Gatlin vs Asafa Powell vs Tyson Gay in the 100m at the Lausanne Diamond League. All three have been blazing up the track with Gatlin and Powell taking unbeaten records into this one.

Can Gatlin be stopped in Lausanne? Will Asafa end the streak of seven consecutive losses to the American?

AndrÈ: Asafa has been really impressive this season so far, but I think we agree that this is his first true test with Justin Gatlin and Tyson Gay both in great form as well.

KC: I have an issue with Asafa over the years when he matches up with these two athletes. It seems he has a mental problem here.

AndrÈ: Well, it's true that his record against both isn't great, but, he did beat Gay in their last two races and he does seem to have a different level of self-confidence from what I have seen these days.

KC: Yes, he looks more mentally focused and, at this stage, I think he is ahead of Gay but, with both Americans in the race, this could be an added motivation for Gay, and they will want to send strong messages before Beijing.

AndrÈ: Asafa will beat Gay for sure. Gay seems to be loading up after some heavy track and gym sessions since he arrived in Lausanne. Bear in mind, too, that Gatlin ran in Budapest on Tuesday and only arrived in Lausanne late yesterday. So that could also work in Asafa's favour.

KC: Gatlin looked easy in Budapest and I figure he was using that run as preparation for today's big showdown and could go sub-9.70. However, Asafa is yet to go full blast this season and, if he gets his normal good start, he could be dangerous.

AndrÈ: His last 40m in Paris wasn't great and he felt he needed to improve in that area. Asafa's start is key! If he gets out very well and holds it together, he will test Gatlin's 9.74 PB and WL time and Gatlin will perhaps need a new PB to beat him. Asafa seems to like running in Lausanne, too. Remember he got his PB of 9.72 here.

KC: Asafa might love running there, but it doesn't matter. Gatlin is on top of his game. He won here last year and will want to do so again. A defeat here could play on his mind for the rest of the season, and he doesn't want to give his rivals that edge.

AndrÈ: Ok, well, it sounds like you are going with Gatlin?

KC: No one will beat Gatlin right now. I see Gatlin scoring a convincing win in 9.69 and the real race could be between Powell and Gay for second place.

AndrÈ: Bwoy, it takes a brave man to go against Gatlin right now, especially when Asafa is the other option, given recent history. Everything says Gatlin, but there are a few things going in Asafa's favour - no pressure, and this time he will take his shot. Asafa for a close win in 9.77.

Bolt’s celebrity continues to pay off for Puma
Showdown in Lausanne
Powell ready to defend Ja in Beijing
9.84 is Asafa's magic time
No sweat for Safa