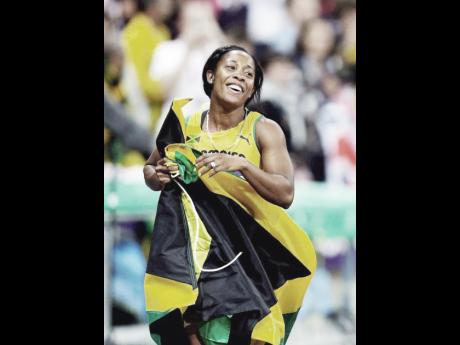 An American publication, Track and Field News, now predicts that Jamaica will win nine medals at the upcoming World Athletics Championships in Beijing.

This prediction was released on the publication's Internet website on July 10 and suggests that Shelly-Ann Fraser-Pryce will be the only Jamaican to win a gold medal. That success is expected in the women's 100 metres.

The latest prediction revises one published on June 30, which gave Jamaica 11 medals, with gold going to Fraser-Pryce, sprinter supreme Usain Bolt and hurdler Omar McLeod. Perhaps in deference to his injury troubles, Bolt isn't mentioned at all in the latest predictions and McLeod drops from gold to bronze in the 110 metres hurdles.

McLeod's inclusion comes despite his fall in his first professional race and reports of a hamstring cramp.

predicted silver for Powell and Ashmeade

The respected United States (US) publication assigns silver medals to Asafa Powell in the men's 100m, to Nickel Ashmeade in the 200m, and to Jamaican relay teams in both 4x100m events and the ladies 4x400 metres. Bronze medals are expected for McLeod, Commonwealth Stephenie McPherson in the 400m, and Fraser-Pryce in the 200m. That last prediction is retained from the June 30 edition even though Fraser-Pryce has announced that she will not attempt to defend her World title in the 200m.

As is customary, Track and Field News upgrades its predictions on a regular basis as major championships approach. One area likely to change concerns US star Allyson Felix. As national champion over 400 metres and 2014 Diamond League 200 winner, she is qualified for both the 200m and 400m in the World Championships. The magazine lists her as the winner of both events but with a note acknowledging that she will only run one individual discipline. A 200-400m double is well nigh impossible. The 200m semi-final is just 70 minutes before the 400m final on day six of the meet.

The publication's prediction team has continued to include Allyson Felix as the winner in both the 200 and 400 metres. When the sensational American tried that combination at the 2011 World Championships, there was no overlap. She was second to Amantle Montsho of Botswana in the 400m and then took third in the 200m to compatriot Carmelita Jeter and winner Veronica Campbell-Brown.