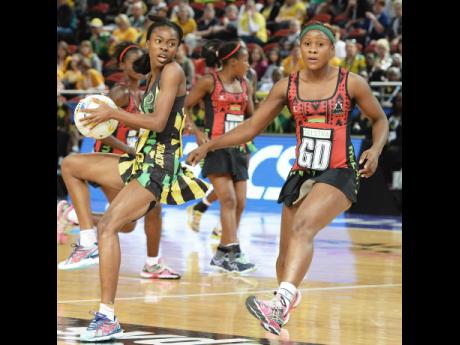 Collin Reid
Jamaica's Shanice Beckford (left) prepares to make a pass ahead of Caroline Mtukule of Malawi in their game at the Netball World Cup in Sydney, Australia yesterday. Jamaica won 63-62 to advance to the semi-finals against hosts Australia. The semi-final was scheduled for last night (Jamaica time).

The Sunshine Girls squeezed through with a 63-62 win in what was described as the tightest match of the tournament after Trinidad and Tobago defeated Samoa for the first time 66-47.

The Jamaicans showed consistency and composure in all four quarters, which got them over the line after both teams put on a spectacle for the roaring crowd in Allphones Arena.