‘Expect a lot this season’ 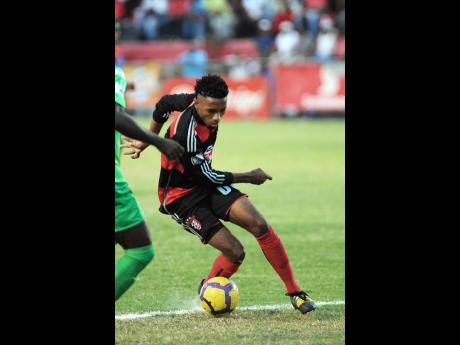 An own goal in the 41st minute, a clinical finish from Lennox Russell in the 45+ and Andrew Phang strike in the 48th minute from the penalty spot gave defending champions Arnett Gardens a convincing win over the encouraging debutants UWI FC on Monday night in the Red Stripe Premier League (RSPL).

The above statistics speak to the outcome of the match, but what will not be borne out by that is the importance of and increasing influence of Vishinul Harris on the Arnett Gardens team. The 22-year-old, who was a part of Jamaica's Under-23 team which failed recently to qualify for the Olympics, was unplayable when he wanted.

It was on one of his 'hot knife through butter' runs that he was brought down in the second half to earn the penalty, which Phang dispatched with ease. That and more gave the former Charlie Smith player enough to feel encouraged.

"Actually, I have to give thanks for all things. The Father has made this possible. I just continue to work hard. I know I am still developing and that I have a lot to learn about the game," he said.

Monday night's performance, Harris said, is only a start of what is to come later on in the season, as he works to raise his game.

"You can expect a lot from me this season. My aim really is to make myself a better player and I am really looking forward to shining this season.

"Last season was an injury-plagued one for me as I got a lot of injuries and played just about 10 games. Right now I am working hard on my fitness and trying to stay healthy and once I am healthy you will see what I can do," stated Harris.

The fire in Harris, who also played Under-20 football for the country, was fuelled by the country's failure in to qualify for the Olympics.

With representing his country at football in the Olympics out of the way, there is just the Reggae Boyz now for Harris and that he said requires a lot from him.

"It is still my dream to play for the country at the highest level, but it will take a lot of work and dedication from me. There is a team right now in competition so for me to get a chance I will have to show that I can do it and I am prepared to do that," he declared confidently.