Hamilton on brink of securing F1 title after Sochi win 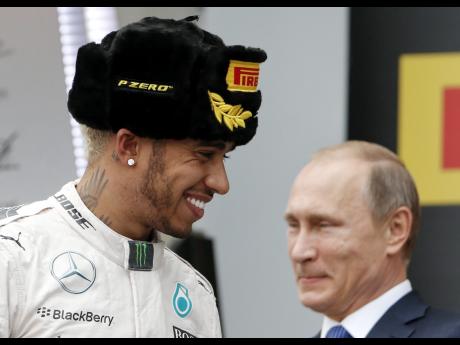 AP
Mercedes driver Lewis Hamilton of Britain celebrates on the podium flanked by Russian President Vladimir Putin after winning the Formula One Russian Grand Prix at the Sochi Autodrom, in Sochi, Russia, yesterday.

Lewis Hamilton took a giant leap towards his second straight Formula One drivers' title, and third overall, when he won the Russian Grand Prix here yesterday.

Starting from second on the grid, the 30-year-old Brit capitalised on the retirement of pole-sitter and Mercedes teammate Nico Rosberg after eight laps, to take the chequered flag in one hour, 37.11 minutes.

Ferrari's Sebastian Vettel was five seconds behind in second, while Force India's Sergio Perez snatched a surprise place on the podium.

With his ninth victory of the season, Hamilton moved 66 points clear at the top of the drivers' standings on 302 points, and now needs nine more points than the second-placed Vettel and two more than third-placed Rosberg at the next race in the United States to clinch the title.

"I've been incredibly grateful to be where I am. I think today's just a happy moment for me," said Hamilton, whose paternal grandparents are Grenadian.

"Yesterday, of course, when you qualify second and your target is to excel and over-deliver and when you under-deliver, of course it's not a happy moment, but today I came here with a positive attitude, which I have at every race, and I think even in the last race - not all the races - I've been incredibly grateful for the car holding together."

Hamilton drove aggressively from the outset, but failed to get past Rosberg, who opened up a lead after the first lap.

A smash-up shortly after saw the safety car come out, and when the race restarted on lap four, Rosberg was already experiencing problems with his throttle.

With the car fading, Hamilton snatched the lead on lap seven and dominated the event with Vettel in pursuit.

The victory was Hamilton's second straight in Sochi following his triumph last year - and the 42nd of his career - tying him with Vettel for third on the all-time list.

His victory also gave Mercedes the constructors' title with three races left in the season.