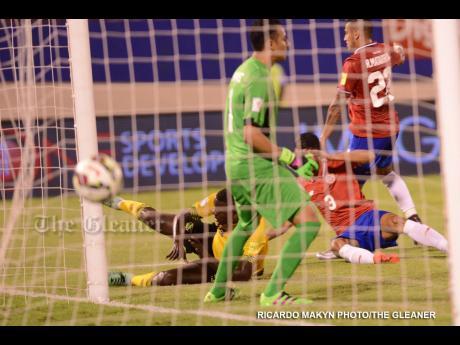 Jamaica's Reggae Boyz were held to a 1-1 draw by Costa Rica in their key CONCACAF semi-final round FIFA World Cup qualifier inside the National Stadium last night.

Goals in either half by Jamaican midfielder Je-Vaughn Watson and Costa Rica's Johnny Acosta has left things interestingly poised in the group.

The Jamaicans grabbed a deserved lead in the 16th minute after midfielder Watson went low to meet a teasing Kemar Lawrence cross at the back post, sending his header in the opposite direction.

They could have been 2-0 up just before half time, but Clayton Donaldson could not make contact with a low cross by Joel McAnuff as the hosts looked comfortable in possession, while enjoying the better chances.

Earlier, McAnuff missed one of several Jamaican opportunities as he wasted a glorious chance to send the Jamaicans ahead in the 8th minute, after he was found unmarked at the back-post after a flicked header, which came from a long throw by full back Lawrence.

The visitors ended the first half with a couple half-chances themselves, but were not able to break the Jamaican backline.

They did, however, get the breakthrough in the 67th minute when Johnny Acosta latched on to a rebound to make it 1-1 after Joel Campbell's shot was well saved by Jamaican goalkeeper Andre Blake.

Both teams traded chances but neither could add to the scoreline, leaving the Jamaicans to deal with another disappointing result in front of their home crowd.

The Jamaicans now sit on four points with the Costa Ricans improving to seven points.

Haiti and Panama played out a 0-0 draw in the group's other game.

The Jamaicans will travel to Costa Rica where both teams will meet again on Tuesday.