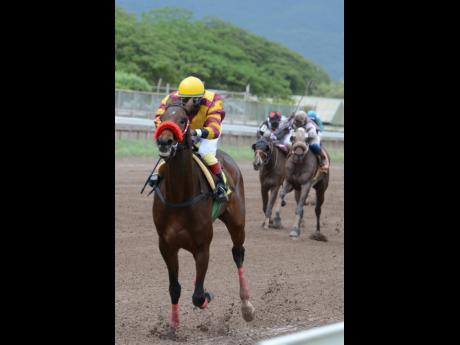 The inaugural running of the Front Runner Dash for native-bred maiden two-year-olds over the round five course is today's feature at Caymanas Park, the million-dollar race attracting seven starters.

Sponsored by Newport Mills Limited, the Front Runner Dash was originally scheduled to be run on Saturday, August 13, but had to be rescheduled after the meet was abandoned due to industrial action by members of the engineering department of Caymanas Track Limited.

Among the seven starters are four newcomers, including the well-advanced duo of BALAZO and AWESOME SAUCE, to be ridden by champion jockey Shane Ellis and leading apprentice Bebeto Harvey, respectively.

Both have worked well in preparation for the race, especially the Anthony 'Baba' Nunes-trained BALAZO, a chestnut colt by Strike out of Voodoo Chant who looked real sharp at exercise on Sunday morning when galloping five furlongs in 1:01.0, his third consecutive bullet work.

He looks a speedy sort, and coming from the favourable number one post position, gets the nod over the Blue Pepsi Lodge-Shahar filly AWESOME SAUCE from the Richard Azan stables, who herself pleased at exercise last Monday morning, galloping 51/2 furlongs in 1:08.3 by 1:01.3. She looks a promising sort, but preference is for the colt, BALAZO, who is highly thought of at home.

Nunes should complete a Cup race double with either his recent St Leger winner BIGDADDYKOOL or the much improved HOUDINI'S MAGIC in the annual renewal of the Nigel B. Nunes Memorial Cup over 1820 metres for open allowance horses.

The seven-horse field also includes the likely favourite, LONG RUNNING TRAIN, who finished a close third to 'Horse of the Year' SEEKING MY DREAM and PERFECT NEIGHBOUR in the August 6 Prime Minister's Stakes grade one race over 2000 metres.

Although allotted topweight of 57.0kg, LONG RUNNING TRAIN, now taking orders from trainer Ian Parsard following the recent passing of his father, Harry Parsard, will only go down fighting as she's so genuine and consistent. But allowing 4.0kg to BIGDADDYKOOL, who went down fighting in the Derby but came back to win the St Leger, should prove her undoing.

Victory for BIGDADDYKOOL (or HOUDINI'S MAGIC) would be most fitting, seeing that the race is run in memory of his late father, Nigel Nunes, who was champion trainer in 1976.

Other firm fancies on the card are the 2015 St Leger winner SUPERLUMINAL DILIGENT in the fifth; SUPER COP over BIG DATA in the eighth; and MAMETA in the ninth.