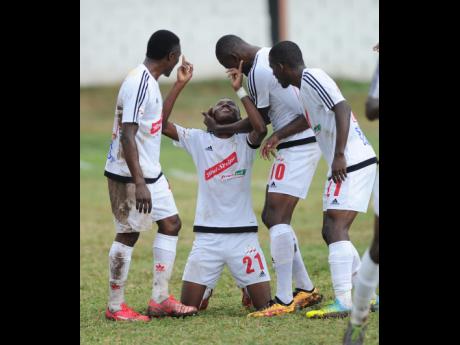 Andrae Bernal came on as a late substitute and scored the winning goal for the University of the West Indies FC against Tivoli Gardens in a thrilling 3-2 encounter in the Red Stripe Premier League at the Edward Seaga Complex yesterday.

The game was a fierce encounter as both teams ended with ten players each. Tivoli's Shavar Campbell picked up a red card in the 35th minute for violent conduct, while Kemar Flemmings was issued a second yellow card and was ejected in the 79th minute.

The teams battled each other hard for the entire game. However, UWI scored in added time to break the deadlock.

Bernal was naturally happy to score the winning goal for his team.

"The aim was to get three points, and that was achieved in a team effort," Bernal, who replaced Anthony Greenland in the 83rd minute, told The Gleaner.

"We want to finish in the top two for an automatic semi-final spot in the championship round, so to beat the leaders was very good for the team," he added.

THE ISSUE OF INJURIES

Bernal has been in and out of the team due to injuries and is looking forward to staying injury-free for the remainder of the season.

"We are a confident young team and I want to stay injury-free in order to assist the team," he added.

UWI coach Marcel 'Fuzzy' Gayle disclosed that the game plan was not to make Tivoli beat us in their physical game.

"We didn't want Tivoli to get the better of us in a physical encounter, so we were prepared for that," Gayle said.

Meanwhile, coach of Tivoli Gardens Omar Edwards said his team moved away from the game plan.

"We lost our emotion and deviated from the game plan. The early red card took a toll on the team. We played with ten players for too long," Edwards said.

The win pushed UWI on to 42 points, the same as Montego Bay United and Tivoli Gardens. However, Tivoli remained in pole position with a superior goal difference.

'We stand with you' - Police chief gets expected support from unions
Calls mount for JDF to speak on internal actions since Tivoli operation
‘We want Steve’ - Tivoli residents disappointed that trusted senior superintendent not returning
Tivoli Report: Fix the problems in low-income communities
Sundown shutdown - Cops urge residents of Tivoli and Denham Town to leave the streets by 6 p.m.