Pelicans fly to top of RSPL 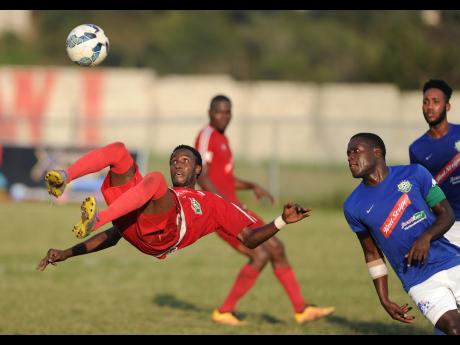 The University of the West Indies moved to the top of the table in the Red Stripe Premier League (RSPL) when they edged struggling Jamalco FC 1-0 at the UWI Bowl in Mona yesterday.

The tertiary institution team are on 46 points courtesy of a goal by Anthony Greenland in the 37th minute.

Jamalco had the better chances but were let down by faulty shooting. The promoted team had a glorious chance to level the score, but their captain Shauntel Mundel, kicked a penalty that was saved by UWI's custodian, Amal Knight, in the second half.

Coach of UWI FC Marcel 'Fuzzy' Gayle said that his team came into the game to win in order to take control of the points table.

"We are one step closer to the dream of finishing in the top two for an automatic semi-final spot. We were fully aware that a win would put us on top as sole leader," Gayle told The Gleaner.

"We did not play slick today as the team dug deep and secured full points. We plan to play better in coming games," he added.

Jamalco remained on 23 points and slipped into the relegation zone, and it is a concern for coach Rayon Johnson.

"We have to be worried at this time based on our position in the table. We played well today, but finishing has been plaguing us," he said.

In another result, Humble Lion moved into second position on 45 points, following a 2-0 win against seventh-place Reno FC at the Effortville Community Centre in Clarendon.

Maverley-Hughenden inched out of the relegation zone after a 0-0 draw against Portmore United at the Spanish Town Prison Oval.