McGregor not giving up on boxing 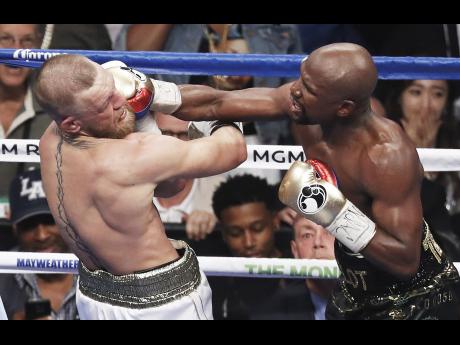 AP
Floyd Mayweather Jr (right) on his way to securing a technical knockout victory against Conor McGregor in their super welterweight boxing match on Saturday in Las Vegas, Nevada.

Conor McGregor was exhausted and hurt by the 10th round, his audacious venture undone by every logical problem with a mixed martial artist entering a professional boxing ring for the first time to take on the most accomplished boxer of recent years.

Yet, the Irishman lasted longer and fought more competitively against Floyd Mayweather Jr than just about anyone expected. McGregor was gracious and analytical afterwards, but he was bothered by one aspect of his defeat: Referee Robert Byrd's seemingly wise decision to stop the bout while McGregor was still on his wobbly legs.

Among his many talents, McGregor has a knack for coming up with slogans that would look good both on a T-shirt and a coat of arms.

Even though he did not get his wish to taste the canvas, McGregor left the Vegas ring with his honour intact and he can go just about anywhere he wants from here.

After hanging in there against Mayweather, McGregor is in an unprecedented position as a huge draw in two combat sports. He could command another hefty boxing pay cheque, or he could return to the UFC to defend his two championship belts as the biggest star in his up-and-coming sport.

McGregor will make no decisions before his upcoming yachting holiday in Ibiza, but he certainly does not seem eager to limit himself to one sport.

The UFC wants its biggest star back in the octagon quickly. McGregor has won titles in two weight classes, but he has never defended either belt, and he has not fought at all since last November.

Yet, the UFC also just made untold millions from McGregor's dalliance with boxing while he was under contract. President Dana White realises McGregor will be impressed by boxing money, and White says he is willing to write a cheque that will keep McGregor in the cage.

"I would rather he did not (box again)," White said. "This is not what he does. He is a mixed martial artist."