Russell aims to rule the World 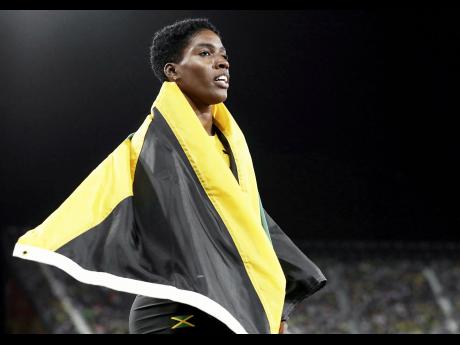 After she dazzled the track and field world with a number of sub 54-second runs in the 400 metres hurdles and a gold medal at the Commonwealth Games in 2018, Janieve Russell has two desires for year 2019.

"I want a medal at the World Championships and I want to finish my degree," Russell told The Gleaner.

The 25-year-old was forced to put her aspirations on hold as she sustained a major injury to her right knee and was reduced to getting around in a wheelchair in 2016.

The lack of wheelchairs ramps on the campus of the University of Technology meant that Russell was not able to access classrooms and subsequently obtained permission from officials at UTech to delay her studies.

But now that she has overcome the injury, Russell said she is ready to take on the mammoth task of becoming the best in the world in the 400m hurdles while finishing up her degree.

"I really want to get my degree and I also want badly to win or get a medal at the world championships next year so I will have to manage my time well and stay focus," the hotel and resort management major said.

According to Russell, her burning desire to complete her degree stems from the fact that there were no plans for her to attend university and at the end of the academic year in 2019 she will become the first person in her family to obtain education up to tertiary level.

"I am from very humble beginnings and my family couldn't afford university so they were no plans for me to go to university," Russell said. "When I got the scholarship to come to UTech it was a big moment for my family."

She continued: "I am going to be the first one in my family to obtain a degree and I really want that."

Russell admits that it will be challenging pursuing her degree while trying to become the best 400m hurdles runner in the world but according to her Shelly Ann Fraser- Pryce proved that it can be done.

"Shelly did it and a number of other athletes who were here at MVP did it and because they did it I know I can do it as well," She said.

The former Holmwood High School athlete broke the 54 second barrier for the first time at the Shanghai Diamond League in May when she stopped the clock at 53.78 seconds. And the effort, which she describes as easy, opened up the floodgates for a spate of 53 seconds runs.

"When I ran 53 for the first time, I was surprised. It was my first international race of the season and it didn't feel like a 53. And so my confidence started to grow because I was saying if I ran 53 seconds that easily I think I can go faster," Russell said.

Russell knows that she will have to break the 53 second barrier to become the best in the event as Americans Dalilah Mohammed, Shamier Little and teenage sensation Sydney McLaughlin have all ran 52 seconds already.

"I know the competition is going to be very stiff next year but it is all about what you do on the day and so I will prepare to ensure that they have to run 52 low to beat me," Russell said.