‘I wanted my sister to win’ - Tina Clayton ambivalent after impressive win, as Davis, Moore and Distin delight at Champs 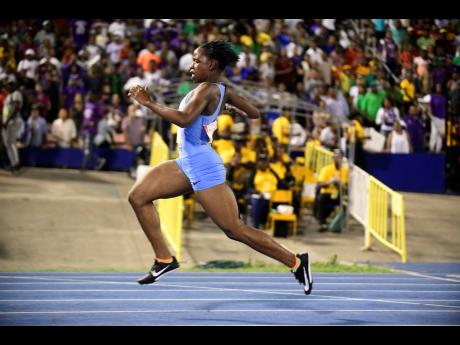 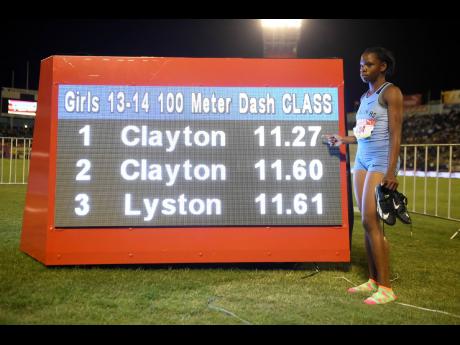 Gladstone Taylor
Tina Clayton (Edwin Allen), 11.27, poses beside the display board, after her record run in the Class Three girls 100m final at the ISSA/GraceKennedy Boys and Girls' Athletics Championships at the National Stadium yesterday. 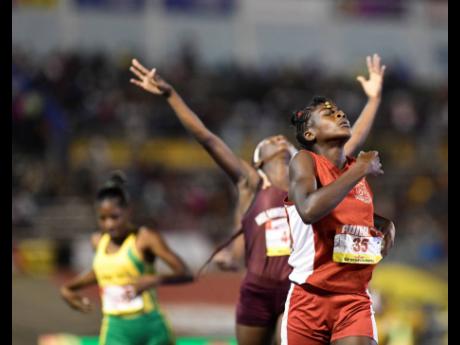 Tina Clayton smashed the Class Three Girls 100m record in one of the most impressive performances at the ISSA/GraceKennedy Boys and Girls Athletics Championships. However, with her twin sister Tia being among those who saw her heel from start to finish, the Edwin Allen speedster was left with ambivalent feelings inside the National Stadium.

The pair secured a big quinella for the defending girls champions, who continued their march to a sixth straight title and although Hydel’s Lamara Distin won two gold medals, including a record, it wasn’t enough to keep her school close enough on the penultimate day of the championships.

Tina, who had been looking at her sister’s back all season over the 100m, stopped the clock at 11.27 seconds to break Shauna Helps’ seven-year -old mark of 11.50 seconds. No other 14-year-old girl in the world has ever gone faster.

You would think she would be thrilled with her achievement, but the girl from Grange Hill in Westmoreland was not in a celebratory mood after the race, as her sister struggled to hide her disappointment.

Tia registered 11.60 for the silver medal, while Brianna Lyston of St Jago rounded out the top three with 11.61.

Moments later, star sprinter Kevona Davis ensured that Edwin Allen, maintain their lead, when she came as close as two hundredth of a second off her record of 11.17 in Class Two.

“I was hoping to go for my own record but I am pretty pleased with the time because this is my third 100m for the season and coming back from injury, I am absolutely pleased,” Davis said.

But Distin and Ashanti Moore kept Hydel’s hopes alive. Moore stormed to a personal best of 11.17 seconds to win the Class One girls 100m. Distin, in her final year at school, soared to 1.87m to erase Chanice Porter’s record of 1.86 metres.

“I am feeling great. My aim throughout the season was just to come out here and break the record. While I was out there, I was saying to myself that this is my last year and I want to leave a mark,” Distin said. Edwin Allen’s Janique Burgher finished second with 1.82m, while Distin’s teammate Rhianna Phipps was third with 1.76m.

Distin had to use her worn legs to break the record as she had won the Triple Jump two hours earlier.

She leaped to 13.37m metres to win, while Phipps grabbed the silver medal with the same distance. Distin was awarded the gold based on the countback rule.

Edwin Allen’s Kadine Brown pulled off a big final throw of 39.45m to put herself on the podium and gave her school six important points in the Class Two girls Discus Throw.

Motivated by the misfortunes of her teammates, Roxene Simpson (Clarendon College) launched the disc to 41.38m to win the event, while St Jago’s Kayla Davis grabbed the silver medal with 39.84.

“The gold medal means a lot for Clarendon College. We have been off the scene for quite a number of years and this shows that we are coming back and doing something great .There has been a lot of ups and downs in the camp so I took it up on myself to go out there and do something great. We have been plagued with a lot of false starts and a lot of disqualifications and so I had to do what was necessary for them to stay motivated” Simpson said.

But it was Holmwood Technical’s Cedricka Williams broke the second record in the girls section of these championships, when she threw 42.47m to win the Class Three Girls Discus Throw.

The 14-year-old recovered after fouling on her first two attempts to produce the big throw on her fourth try. Edwin Allen’s Damali Williams scored seven valuable points for her school with her 40.43 effort for the silver medal while Clarendon College’s Shanara Richards won the bronze medal with 39.13.

At the start of today, Hydel will try their best to close the gap with the 400 metres as Onieka Mcannuff, Gariel White and Charokee Young are aiming for a clean sweep.

The Ferry-based school will also gain points in 800m events, but Edwin Allen will move again in the 200m as the Clayton twins and Davis look to complete their sprint-doubles.