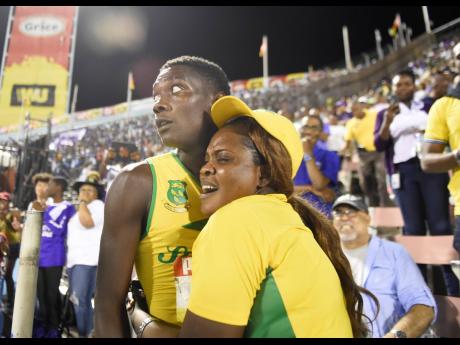 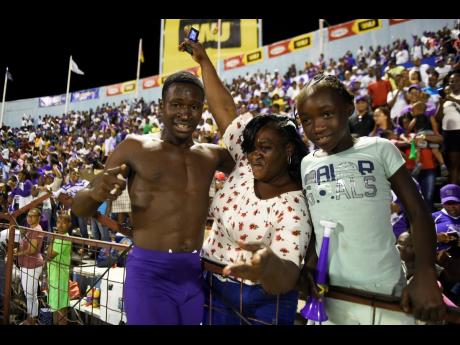 Gladstone Taylor
Romel Plummer (left) of Kingston College celebrates his win in the Class One boys 400m hurdles with his mother Annette Chisholm and sister Venice Plummer on Day Four of the ISSA/GraceKennedy Boys and Girls’ Athletics Championships at the National Stadium yesterday.
1
2

Kingston College (KC) inched closer to their first hold on the Mortimer Geddes Trophy since 2009 after a strong and consistent all-round performance in the boys’ finals on yesterday’s fourth day of the ISSA/GraceKennedy Boys and Girls’ Athletics Championship at the National Stadium.

The many-time champions started the day with an eight-point lead over arch rivals Calabar High, but when the 400m hurdles came around in the afternoon session, things took a drastic change.

Jayden Brown and Rayon Campbell took the ‘quinella’ in the Class Two 400m hurdles with times of 51.88 seconds, and 52.85, respectively, to give the fames ‘Purples’ maximum points from event. Tarrant High’s Jeremy Bembridge, one of the favourites for the event, could only finish third in 53.36.

KC stretched the lead even further when Romel Plummer won the Class One final in 50.43, ahead of Excelsior High’s Devonte Archer, 51.20, and Wolmer’s Boys’ Jeremy Farr, 51.41. Calabar were expected to hit back in the Class One boys 100m sprint where there were no KC representatives but two from Calabar. However, event favourite Michael Stephens was upstaged by teammate Oblique Seville, who produced the performance of his life to win the event in 10.13. Jamaica College’s (JC) Ryiem Robertson was second in 10.19 and Conroy Jones of St Elizabeth Technical, third in 10.32. Stephens’ 10.34 was only good enough for fourth. Calabar fell well behind as KC built up a 40-point lead.

KC had earlier increased their lead when Bouwahjgie Nkrumie, 10.54, and teammate Terrique Stennett, 10.57 finished second and third respectively in Class Two. The event was won by St Jago’s Vashaun Vascianna in a blistering 10.38. Christopher Scott, of Jamaica College, who set the record for the Class Three Boys 100m in the preliminary round, cruised to victory in the final. Although not as fast as his opening round, he was still convincing in 10.73. KC, although not gaining top spot, scored heavily in the event with Yourie Lawrence, 11.04, and Christopher Seaton, 11.12, capturing second and third, respectively.Earlier on the day, one of the brightest sparks at Champs this year, Bellefield High’s Tavaughn Martin, took the Class Three Boys 1,500m event in a record 4:12.50.

“I feel pretty good about the record because this is my first time at Boys and Girls’ Champs and I did great,” Martin told The Gleaner after the event.

“My coach (Dean Tomlin) and my mother told me to go for it (the record) and I did.”

Martin credits Olympian and Bellefield old boy Kemoy Campbell for the inspiration to achieve the feat.

“He’s a member of the Bellefield family and he told me this morning to go for the record.”

The Class Two 1500m Class Two went to Jamaica College’s J’Voughnn Blake in 3:55.63. However, he was displeased with missing out on the record, the 3:55.38 set by Calabar’s Kevroy Venson two years ago.

“I feel like crying right now,” he lamented as he was so close to getting the record. “I could’ve done better, but I’m where I want to be, so I’m fine with that.”

The lockout continued for Calabar in the event as KC’s Henry twins took second and third. Gianni clocked 3:57.60 for second while Giovouni, finished in 3:59.09.The Class One gold and nine valuable points went to Calabar. Kevroy Venson won in 3:56.08. Spot Valley High School’s Tyrese Reid, 3:56.61, was second while Calabar’s Kimar Farquharson, took third in 3:57.