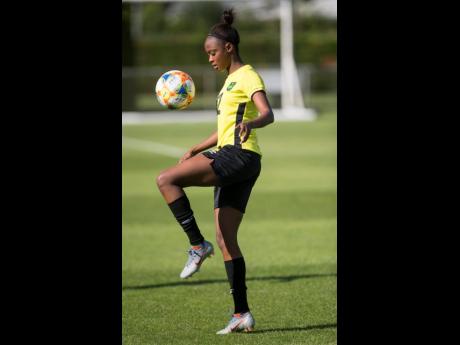 Although the outcome wasn’t what the Reggae Girlz wanted, there were still positives that could be taken from their two week experience in Peru at the Pan American Games.

That was the sentiment expressed by Jamaican midfielder Sashana Campbell, who took over duties as captain of the Jamaica Women’s Football Team during the competition.

Members of the team arrived yesterday afternoon from Lima as Jamaica concluded their Pan American Campaign on Tuesday, defeating hosts Peru to finish in seventh place. Campbell assessed the experience as helpful, particularly for the young players, who were included in the squad.

“I think it was a good experience. The setting was OK apart from it being cold.

They (young players) managed themselves well throughout the entire tournament. We hoped for a better result but I think that we can take a lot from it going forward into the qualifiers coming up,” Campbell said.

Campbell acknowledged that there were areas for improvement but is optimistic of the young players who took their chances.

“Most of them did fairly well. There are areas that we could have stepped up more or better ,in but I think it was a good experience for them, and, hopefully, we can see some of them in the near future,” she said.

It has been a summer to remember for Campbell following her historic Women’s World Cup appearance with the team in June, and she is confident that she will be able to contribute to Jamaica’s efforts in Olympic qualifiers later this year.

“If I stay healthy and keep my fitness up, then I will be able to be called up to play. I think the experience going against South American teams, we have the opportunity to see what to expect from the Caribbean teams coming in and as long as our team stays together, I think we will (advance) from this (Olympic) qualification round,” Campbell noted.

The Girlz lost 2-0 to both Mexico and Colombia before going down 3-1 to Paraguay in their group games in Peru. They then edged Peru 1-0 in the seventh place decider.