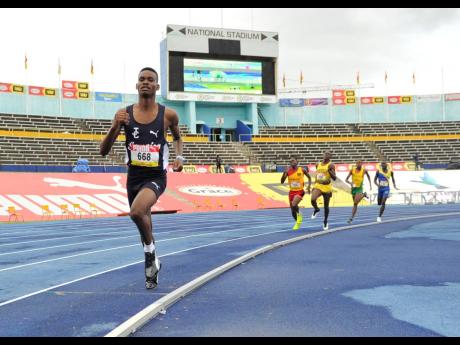 Defending champions Kingston College (KC) and Excelsior staved off strong challenges from Jamaica College (JC) and Wolmer’s Girls to retain their Boys and Girls titles at the two-day Anthrick Corporate Area Development Meet at the National Stadium on Saturday.

With this year’s staging being a regional qualification for the ISSA/GraceKennedy Boys and Girls’ Athletics Championships (Champs) next month, teams came out with their best athletes.

KC showed their strength in sprint and hurdles while JC dominated events from the 400m to 1500m, where they won in all classes as they showed that they are a real threat for KC’s Champs title next month.

J’Voughnn Blake led the way for JC with two wins in Class One. Blake followed up the win in the 1500m on Friday, with a win in the 800m on Saturday after clocking 1:50.87 minutes ahead of Calabar High School’s Rivaldo Marshall (1:53.86) and JC’s Omarion Davis (1:54.47) in second and third, respectively. JC’s Kemarrio Bygrave won Class Two in 1:55.63 minutes, ahead of teammate Khandale Frue, second in 1:55.84 minutes. The Old Hope Road team completed the sweep as Tyrone Lawson took a double after a record run of 2:01.53 minutes to win in Class Three, ahead of teammate Rasheed Pryce, second in 2:02.26 minutes.

JC also had good results in the 400m as Omary Robinson won in Class Three in 50.57 seconds while Mark Anthony Miller won in Class Two in 48.08s, and Javier Brown won Class One in 46.98s.

In field events, KC produced two record-breaking performances through Ralford Mullings, who distanced 59.40m in the Class One discus throw, and Akeel Hanchard who threw the javelin in 63.52m.

Apalos Edwards of Jamaica College won the Class One triple jump with 15.96m, ahead of Calabar’s Luke Brown 15.82m.

Shenell Tucker led the way for Excelsior on the girls’ side with a double. She first captured the Open 400m hurdles in 1:02.71 minutes, then returned to win the Class One 400m in 57.99s.