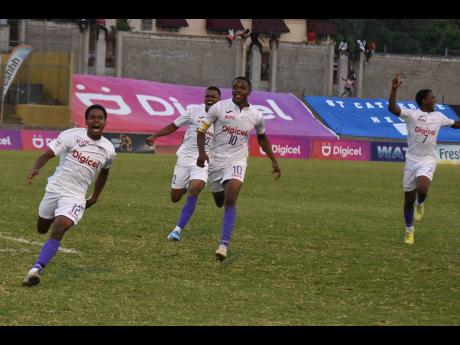 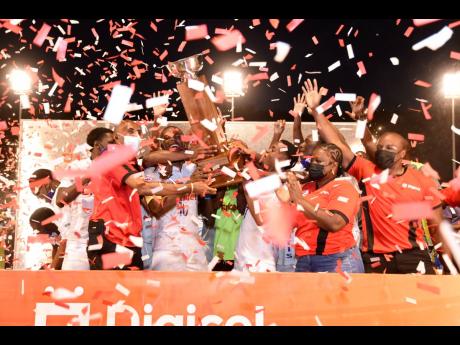 This, after both schools played out an exciting 1-1 draw at full time. It was KC’s second title under head coach Ludlow Bernard in the last three years and the 16th overall hold on Corporate Area football’s most prestigious schoolboy football title.

Christopher Pearson scored for KC in the 29th in the minute but JC’s captain Duncan McKenzie would erase the deficit in the 43rd minute.

KC’s goalkeeper David Martin came up big for his team when he saved the sixth spot kick from substitute Jaheem Fraser to hand the ‘Purples’ the victory. Another JC substitute, Giovanni Mitto, also missed from the spot for the Dark Blues in the shootout.

Jemone Barclay, Carrick Stewart, Ean Mitchell, Luis Watson and substitute Demario McCarthy, were the scorers for KC in the shootout.

Bernard said he had a very strong feeling that the game would have gone to penalties and therefore his team was well prepared for it.

“We were prepared for this because we spent the entire evening yesterday (Friday) working at this and I think the dividends paid off for us,” said Bernard.

“The boys have worked very hard during the season for this and so I am really glad for them because this is some kind of revenge for us because we lost to them in the semifinals in 2019,” he said.

“Jamaica College was very good in the game but as the game wore on, I thought that we got better and we probably should have polished off the game in the second half but such is life,” Bernard said.

Davion Ferguson said he was proud of his team’s efforts despite the defeat to their bitter rivals.

“It could have gone either way in the shootout because when it goes to penalties it is 50-50 and KC scored their goals so congratulations to them,” said Ferguson.

According to Ferguson, there was always going to be a casualty in a final and while he was disappointed it had to be JC, he was still proud and said the team would move on the setback.

Having withstood the early pressure from JC in the early exchanges, Pearson, who is regarded as one of the best players in the competition this season, gave KC the lead with a beautifully placed one-time effort past custodian Denzel Smith from 10-yards out.

However, McKenzie pulled JC level two minutes before half time with an even more spectacular effort, a free-kick from 25 yards, which was so well-placed it beat Martin without so much as a dive from the custodian.

JC’s playmaker Tarick Ximines came close to restoring the one-goal lead on the stroke of half time but he put his effort high over the crossbar from 12-yards.

Both teams battled strongly in the second half but wayward finishing from their attackers meant there was no addition to the score.