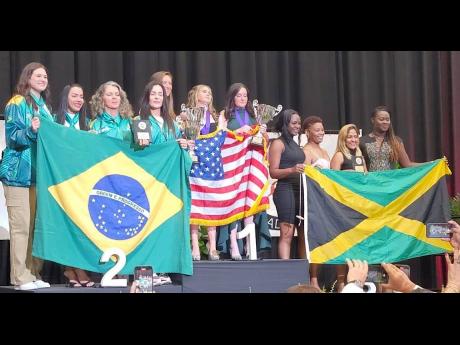 Bramwell, who competed in the Production Optics Senior category, finished second after amassing a score of 1,718 points, with 85 per cent match accuracy.

The Super Six ladies also fulfilled their promise of a podium finish, as they placed third in the team category. The United States won the team title with Brazil placing second.

Renee Rickhi was the best of the shooters for the Jamaican women, as she finished eighth in the Production Optics category with 1,090 points and 83rd overall.

Shayon Francis was the next best with 1,063 points which were good enough for 10th place, while captain Sasha Mullings rattled up 818 points for 14th place in the division.

Jamaica’s other female entrant, Yeonie Campbell, scored 1,138 points and finished 75th in the Production category which featured both males and females.

Super Six team captain Sasha Mullings summed up what was a historic participation for the Jamaican women.

“We promised Jamaica a podium finish and we did deliver. I know even if we didn’t make it to the podium, Jamaica would still be proud of us. Considering we have been shooting for less than a year, it is a huge accomplishment.”

It was no surprise that American Christian Sailer took the Open category, after amassing 1,995 points. He got the better of compatriot Chris Tilley, who finished second with 1,911 points and Brazilian Jaime Saldanha third with 1,886.

Jamaican Lesgar Murdock who was dethroned, finished seventh with 1,819 points. For Murdock, the poor conditions brought on by the constant rain cost him another title.

“The conditions were pretty tough because we had a lot of rain which made the stages muddy. I fell on one stage and got water in my gun and that set me back big time,” said Murdock.