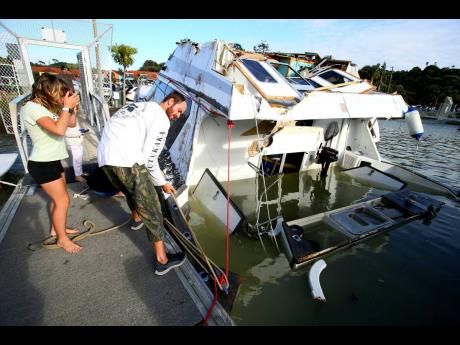 Tanya White
A couple look at a damaged boat in a marina at Tutukaka, New Zealand, on Sunday, January 16, after waves from a volcano eruption swept into the marina.

WELLINGTON (AP): New Zealand’s military on Monday morning was able to send a surveillance flight to Tonga to assess the extent of the damage from a huge undersea volcanic eruption.

A towering ash cloud had prevented the military from launching any flights earlier to the Pacific island nation.

People on Tonga described their country as looking like a moonscape as they began the task of cleaning up from the tsunami waves and ash fall caused by the eruption. Communications with the island nation remained limited after the Internet was cut soon after the eruption on Saturday evening.

There were no reports of injuries or deaths although concerns remained for the fate of people on some of the smaller islands near the volcano.

Meanwhile, scientists said they didn’t think the eruption would have a significant impact on the Earth’s climate.

Huge volcanic eruptions can sometimes cause global cooling as sulfur dioxide is pumped into the stratosphere. But in the case of the Tonga eruption, initial satellite measurements indicated that the amount of sulfur dioxide released would only have a tiny effect of perhaps 0.01 degree Celsius (0.02 Fahrenheit) global average cooling, said Alan Robock, a professor at Rutgers University.

Satellite images showed the spectacular undersea eruption on Saturday evening, with a plume of ash, steam, and gas rising like a giant mushroom above the South Pacific waters.

A sonic boom could be heard as far away as Alaska and sent pressure shockwaves around the planet twice, altering atmospheric pressure that may have briefly helped clear out the fog in Seattle, according to the National Weather Service. Large waves were detected as far as the Caribbean due to pressure changes generated by the eruption.

In Tonga, it sent tsunami waves crashing across the shore and people rushing to higher ground.

With Internet and phone lines down, friends and family members around the world were left anxiously trying to get in touch.

Government websites and other official sources remained without updates on Sunday afternoon.

New Zealand Prime Minister Jacinda Ardern said on Sunday that there had not yet been any official reports of injuries or deaths in Tonga but cautioned that authorities hadn’t yet made contact with some coastal areas and smaller islands.

“Communication with Tonga remains very limited, and I know that is causing a huge amount of anxiety for the Tongan community here,” Ardern said.