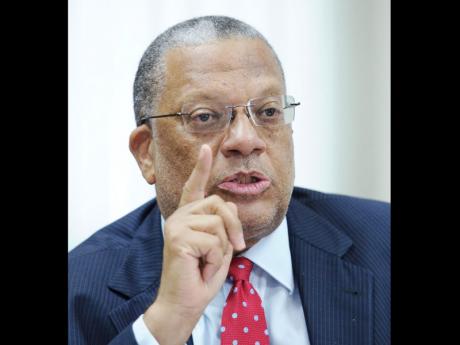 A team from the International Monetary Fund (IMF) is expected here today to conduct the first quarterly performance review under the four-year extended fund facility granted Jamaica in May.

The mission will meet with Minister of Finance Dr Peter Phillips and his technical team from Bank of Jamaica (BOJ), Planning Institute of Jamaica (PIOJ), and the Financial Services Commission (FSC), said Hilary Robertson, the senior director in charge of the Board/Management Secretariat and public relations at the central bank.

The IMF mission team and local agencies will discuss progress on the quantitative targets and reform agenda agreed under the programme, inked by the IMF executive board on May 1, this year.

They will also meet with the Economic Programme Oversight Committee (EPOC), a new creature established as an internal monitoring agency under the current Jamaica-IMF programme, as well as several key implementing ministries, agencies and major financial institutions, Robertson said.

Both Phillips and EPOC have said Jamaica is on track to hurdle its first IMF test, which will unlock another SDR 19.97 million or US$30 million of funding under the SDR 615.38 million or approximately US$932m EFF.

The distribution scheduled for September will be the second under the front-loaded programme. The first was for US$202.6 million, of which US$90 million was for budgetary support, released at the approval of the EFF by the IMF Board in May.

"The mission will seek to not only confirm the progress already reported, but also form a view on the likelihood of achieving the programme objectives, given the planned pace of implementation," Robertson said.

The IMF team will brief the press on August 23 on the mission's findings. The IMF board is expected to consider and sign-off on the first performance review by September 20.

Jamaica is scheduled to undergo 15 reviews in total over the life of the four-year bailout programme, one of the primary goals of which is to reduce Jamaica's heavy debt load from 147 per cent of GDP to 96 per cent by 2020.

A debt swap that was a pre-condition of the IMF deal is expected to bring savings of J$17 billion per year, but other savings are required if Jamaica is to meet the programme target, as noted in the agreement.

Referring to the first quarterly IMF review, Phillips reported progress at a business clinic in Mandeville in late July on key components of the country's economic reform programme.

While pointing out that there are "important legislative changes still to come" aimed at advancing tax reform and improving tax collection arrangements, the finance minister was nonetheless satisfied that the administration had so far performed creditably in fulfilling its obligations under the IMF programme.

"We feel very satisfied about the June 30 performance review, and we expect that when the Fund mission visits ... their review will confirm our review that June 30 targets were all on track. We expect also that there will be a similar performance for the future targets," Phillips said.

Government is also to present to the IMF staff a conceptual proposal for the design of a fiscal rule by August 31. Future budgets are to be crafted based on the new fiscal rule, starting next fiscal year.