Former Prime Minister Edward Seaga was noted for profound pronouncements he made from the aisles of parliament, political platforms, and podiums across Jamaica.

From matters of the economy to education, music to management, friends to fatherhood, Seaga made memorable quips and quotes.

His most notable was when he defended his potency saying he never need a health certificate as he was full of "vim, vigour, and vitality.”

Here are just a few of the quips and quotes from the career politician and family man:

On US drug war
America planning to stop nuclear missiles with a Starwars defence system even though it could not stop commuter planes carrying ganja. If there were no buyers, there would be no sellers. I'm not satisfied that the United States is doing the most it can do.
- July 18, 1988, Jamaica Labour Party Annual conference, National Arena

Message to Mandela
Over the years, Jamaica has been a relentless opponent of the abhorrent policy of apartheid and we subscribe totally to the view that humanity can never truly beat peace with itself until this scourge is removed from the face of the earth.
- 1988, message to Former South African president Nelson Mandela

Government performance
If they do not seek to change their policies and their manner of government, then we either have a choice of sitting by and watching them wreck the country to a point where it can't be rebuilt, or we have a choice of doing something about it and bringing it forcibly to their attention, as we had to do once before. We will lock down the country like a sardine can so not even rain could get in.
- July 14, 1991, JLP Annual Conference

On human rights
If the Constitution made freedom from victimisation a fundamental article of human rights we will remove a vast area of conflict, unleash a great fund of goodwill, create a real basis of personal security and build new foundations for true Justice for all.
- May 22, 1991, Budget Presentation, House of Representatives Sacrifice in public life
I made the sacrifice of my own well-being and that of my family because of the mission which called me to enter political life to help those who could not lift their own burden. The smile of a gleeful child, the hug of an agonised mother and the tears of appreciation of the elderly poor have been my reward - October 9, 2012, Joint sitting of Houses of Parliament

On government spending in the 1970s
All of this total some $400 million and it has left the Consolidated Fund bankrupt of revenue, the Contingency Fund naked, the Sugar Industry Authority hungry, the bauxite industry angry, the Bank of Jamaica confounded and the commercial banking system dumbfounded
- October 9, 2012, Joint sitting of Houses of Parliament

On an occasion where his microphone malfunctioned
“I regret that we have, on this occasion commenced with a malfunctioning mic. That is a problem we have had to live with for a year,” said Seaga poking fun at his political opponent Michael Manley also nicknamed ‘Mike’ - November 1, 1980, Swearing-in as Prime Minister

On fatherhood
I’m a loving father yes, and I provide for them, but I never had the time to be as close to them as I wanted to be. I gave seven days a week to work, I may have been wrong about that but I just couldn't hold back when there was something to be done. And I'm trying desperately to make up now before it's too late - May 28, 1989, Gleaner interview Friends and politics
"I've found out that friends and politics don't mix ... because sometimes you have to tell a friend ‘no’ and you lose him as a result. And then again you have different types of friends for different reasons. You have friends in politics, friends in your recreational life and friends you just like to sit down and talk to in any case, it all adds up to very few - May 28, 1989, Gleaner interview

On leadership
"Leadership is a lonely existence, very lonely and if you're not able to use your time constructively and productively and get satisfaction out of that it could be a lonely situation. It would drive other people crazy, but not me."
- May 28, 1989, Gleaner interview

On health status
"When the People's National Party goes on the platform, they don't have anything sensible to say. All they talk about is who is sick and who is healthy. It has reached the stage now where the Prime Minister has had to show them his health certificates to show that he's not sick. I don't have to show health certificates, I am full of vim, vigour and vitality."
- October 1, 2002, JLP rally, Denham Town, Kingston Western 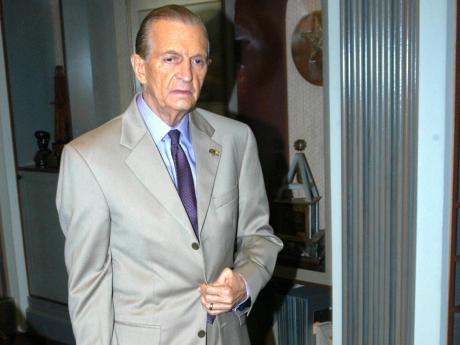 Dancehall music
"We seem to be searching, but fruitlessly. After a run of all the different basic rhythms that we have developed, we have cooled off into dancehall. I am not going to say anything disparaging about that except that I don't like it. I am a man that when I think music, I think melody. I think lyrics. I think rhythm, but I see them all together, packaged in one thing, and my basic concept is that if you can't whistle it, it is not music."
- September 2018, Devon House, St Andrew, official reopening of Things Jamaican