The International Monetary Fund must heed its own advice 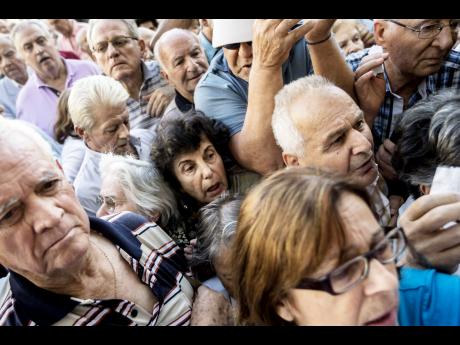 AP
Pensioners crowd the entrance of a bank in Athens. Long lines formed as bank branches around the country were ordered by Greece's government to reopen to help desperate pensioners without ATM cards cash up to €120 (US$134) from their retirement cheques.

Last week Thursday, a couple days after the governor of Puerto Rico said that his country's US$70-billion debt was 'not payable', the International Monetary Fund (IMF) released a report in which it stated very clearly that Greece's €320-billion debt is not sustainable without substantial debt relief.

This debt relief, said the IMF, will likely include write-offs by European partners of loans guaranteed by taxpayers. Eurozone countries tried their level best to stop the publication of the report - so much for transparency and similar high-sounding principles - because they thought it would add fuel to Alexis Tsipras' 'bellowing' for debt forgiveness. Indeed, to Eurozone leaders who had largely become viscerally opposed to Tsiparas and everything he and his Syriza party stood for, the timing of the release of the report was patently unhelpful.

Brussel's fear was rational and it materialised almost immediately. Mr Tsipras wasted no time in taking the message to the Greek people. Last Friday, two days before the EU-despised referendum, he said this: "Yesterday, an event of major political importance happened. The IMF published a report on Greece's economy which is a great vindication for the Greek government as it confirms the obvious, that Greek debt is not sustainable".

Clearly, Alexis Tsipras had learned the hard way over five months of difficult and sometimes humiliating negotiations that his troika of lenders - the EC, ECB and the IMF - is not into debt forgiveness. They did not seem to understand the depth of economic, social and personal pain the vast majority of Greeks suffered over the last five years of very severe austerity, and they were bent on loading more burdensome conditions and financial pain onto Greece. He figured, rightly, that he was not going to win any financial and economic arguments with the moneyed leaders in suits and so he went political.

Debt forgiveness not new to Europe

While the EU bureaucrats and even the IMF were saying their last offer to Greece was expired and was 'off the table', Tsipras knew that a referendum decision by the Greek people would have to be noticed by the political leaders in Europe.

He was betting that the two biggies in Euroland - Germany and France - would have to respond. Tsipras knew that the US would also have to take note. The resounding 'no more austerity' by a powerful majority of 61.5 per cent in a high turnout election, placed Germany's Chancellor Merkel and France's President Hollande at a hurriedly called meeting in Paris the day after the Greek decision. France made it clear that everything should be done to keep Greece in the Eurozone. Angela Merkel's German unflinching and hardening position against debt forgiveness for Greece is a curious one when viewed from a historical perspective.

The very popular French economist, Thomas Piketty of the Paris School of Economics, whose treatise on inequality called Capital in the Twenty-First Century made him a star last year, argues that decisions about whether to forgive can have generational implications. In the Washington Post of Tuesday this week, Piketty is quoted as saying: "When I hear the Germans say that they maintain a very moral stance about debt and strongly believe that debts must be repaid, then I think: what a joke."

Piketty continued, "Germany is the country that has never repaid its debts. It has no standing to lecture other nations. We cannot demand that new generations must pay for decades for the mistakes of their parents." The young people in Greece voted a resounding 'no' to austerity and 'yes' to debt relief. They were not at the table when these debts were booked by bankers and politicians in their names, and about 62 per cent of them are out of work in Greece.

In 1953, when the United States and European countries met in London to try and re-establish West Germany, they were owed US$7 billion - some from World War 1. That German debt is about US$62 billion at current value which is just slightly bigger than the US$57 billion it is estimated that Germany is exposed to Greece. At that London summit, Greece was one of the forgivers of German 'unpayable debt'. Piketty commented this week that "there have been many ways to repay debts, and not just one, which is what Berlin and Paris would have the Greeks believe."

On Wednesday, Jack Lew, the US treasury secretary, said unequivocally that debt forgiveness must be considered for Greece in order to save the euro. The US air bases in Greece, which are crucial to its security interests in the Middle East and Eastern Europe, and Mr Tspiras' recurring willingness to hop on a plane to Russia, may have influenced Washington's decision.

The simple conclusion, simple but not easy, that has to be drawn is that unpayable debts have to be forgiven in one form or another. The question that Dr Phillips and our Government have to face is why they agreed to such a high primary surplus target, and do they honestly believe that the tough austerity for over three years, increased hardships and poverty, the relentlessly brutal and increasing taxing regime which discourages business investment, will all lead to debt repayment and economic growth?

Given the much-less-than-one-per-cent economic growth we recorded in 2014 and the size of Jamaica's debt relative to gross domestic product, is Jamaica's debt repayable? The answer to that question will be a game changer.