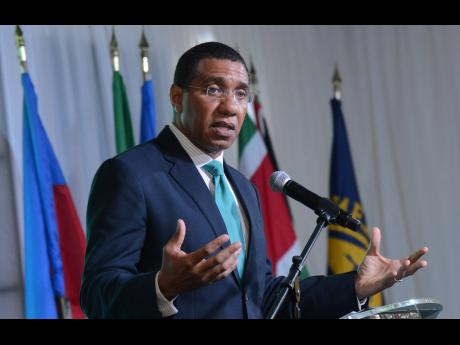 Prime Minister Andrew Holness has said that the threat that climate change poses to Caribbean countries should spur regional leaders to work towards greater cooperation among states across the region.

Speaking yesterday at the sixth High Level Caribbean Forum, held at The Jamaica Pegasus hotel in New Kingston, Holness said that there was a tendency for regional states to focus on the free movement of goods without making a connection with the free movement of labour.

"It becomes a particular concern when viewed against the backdrop of natural disasters. Can you imagine a sustained fallout in our sister islands? How will those economies recover if there is not a mechanism to allow the free movement of labour, even temporarily, to help in the recovery and relief efforts?" Holness questioned.

He said that after the recent impacts of Hurricanes Irma and Maria, many students from some countries in the Eastern Caribbean had to complete their studies in sister Caribbean territories that had not been affected.

"It is this capacity for our respective economies and countries to open our societies, open our schools, that will give us, collectively, the ability to respond to disasters and crises," he added.

Turning to significant threats posed to the region in the form of organised crime, the international narcotics trade, and the smuggling of arms, the prime minister said that the time had come for Caribbean countries to change their approach to how they protected their borders.

"We have to police the Caribbean Sea border as if it were one country and not several countries trying to police their own borders." He suggested that this approach would require increased collaboration on security matters for the region.