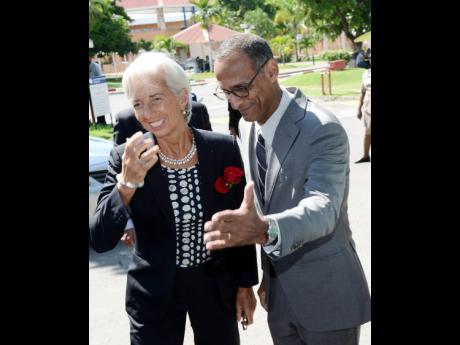 The Managing Director of the International Monetary Fund (IMF), Christine Lagarde, is insisting that public sector reform is absolutely necessary if the Jamaican economy is to unlock its potential for growth.

She said that the public sector wage bill was burdening the country's growth.

Lagarde, who is on a high-level working visit in Jamaica, argued at a function with students at the University of the West Indies, Mona campus, that there was too much spending on the public sector by the Government, crowding out growth-inducing projects.

But she has also contended that there should be a clear purpose for the savings from the adjustments.

"That particular exercise is actually healthy. It is healthy provided that, of course, there is enough trade off so that you do not create additional unemployment that accumulates.

Currently, the Government spends 10.7 per cent of GDP on public sector wages.

However, under the Fiscal Responsibility legislation, that figure should be reduced to nine per cent by the end of the 2019 fiscal year.

But public sector unions are at the moment clamouring for increase wages, flatly rejecting the Government's offer of six per cent increase over two years

That development has caused unease and jitters in the Andrew Holness administration, where there are fears that the Government's targets could be derailed.

Lagarde said that as a former finance minister, she understands that challenges that come with public sector reform, but it was still necessary for the health of the overall economy.

In the meantime, the IMF managing director has expressed confidence in the Jamaican economy, stating that within the next couple of years when the structural adjustments take their full effect, more jobs will be created.

She pointed out that since the implementation of the adjustments, record levels of jobs have been created in the economy.