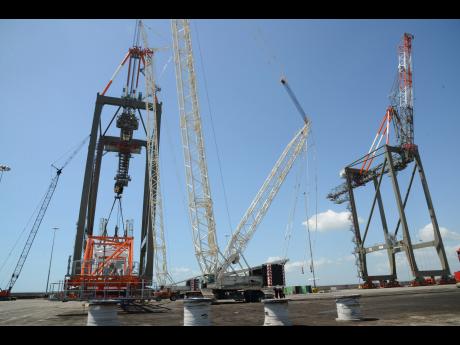 Rudolph Brown
Modernisation and expansion works continue at the port of Kingston, a plan that also includes a makeover of 15 dated structures that serve as offices.

Kingston Freeport Terminal Limited, KFTL, plans to renovate and expand 15 structures at the port, and is now recruiting designers for the project.

Amid expansion and modernisation works at the Kingston Container Terminal, now operated by KFTL under concession, the current project aims to modernise the offices at the port. The buildings are largely dated and at odds with the massive investments in new cranes, heavy dredging and increased berthing space.

The KCT confirmed that it was part of the overall modernisation exercise, but said "unfortunately" it was unable to give further details on the project during the bidding process, while urging consultants to submit proposals.

In February, KFTL announced that it upgraded some 600 metres of berth space, with plans to double that amount by year end at a total cost of US$150 million. It would also see the inclusion of two additional new cranes by April, upping the total to 16. The KFTL also deepened its shipping channel in August 2017, allowing the Kingston port to accommodate larger Pana-max container vessels of up to 14,000 TEUs.

Overall, KFTL is expected to invest approximately US$509 million over two phases of the concession, with the possibility of a third negotiable phase.

Phase one of the port expansion, at US$259 million, includes capital dredging to a draught of 14.2 metres to be completed within five years, and strengthening of the existing quay walls to accommodate the larger vessels and equipment. This aims to increase capacity to 3.2 million TEUs.

Phase two involves a US$250-million plan for further dredging to a draught of 15.5 metres and to grow capacity to 3.6 million TEUs.

Phase three, which is contingent on a future agreement, involves the development of a new deep-water berth with a draught of 15.5 metres.